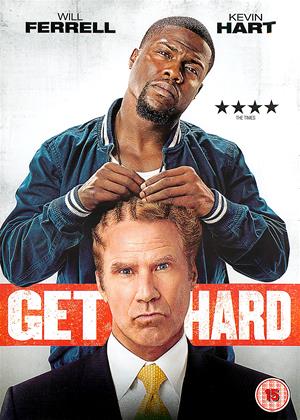 Get to sleep - Get Hard review by NC

Bit of a take on Silver Streak with Gene Wilder and Richard Pryor? Also their later film of Stir Crazy........loads better. Will gone back to easy money/type-cast.

Stranger than fiction and Everything Must Go were pretty good, and Step Brothers does all the zanny one could require in one career.

When I started watching it I was enjoying it , found it funny . After about 30 mins it just started to lose my interest, I think it was just to stupid and over the top silly.

OK - Get Hard review by JD

Will Ferrell does his usual thing but this time with an awful script. A delicate, sensitive but very successful broker is convicted of a crime that results in his gold digging girlfriend ditching him and then him hiring someone to make him tougher. It is a plot and particularly script that would make most actors cry. Will makes it work better than most but it still is trash comedy.

Very crude and lewd, trashy comedy with a simple plot - Get Hard review by PV

Movies like this one are made for teen audiences, so have to - these days - include loads of crude and lewd references, because teenagers find that kind of stuff 'naughty' and therefore funny because it's 'gross' as they would say.

Anyone more mature will tire of it pretty quickly.

The set-up and plot are simple but actually quite good. You can imagine a far better, cleaner version of this sort of comedy made by the great Ealing Studios who made classics like The Ladykillers and The Lavender Hill Mob.

Get Hard is a comedy more notable for its talent than its premise. Rising comedy actor Kevin Hart takes up another buddy role with Saturday Night Live veteran Will Ferrell. The two make for a unique pairing of the slick talker and the loud talker. They’re not exactly made for each other, but they do have a certain appeal as two noteworthy talents feuding for the stage. But Hart once again makes the tragic mistake of taking on projects that pair him up with the right actors and the wrong writers.

This is a story that cannot decide on which direction it wants to go for a laugh. At first, it appears as a comedic clash of the upper and lower class of America. Hart plays Darnell, a dad down on his luck to find a better house and school for his daughter - seeking to launch out of the ghetto with his car wash business. He is, of course, sweet and smart, but not so far down the ladder that he has all the street smarts. Ferrell is the over-the-top hedge fund manager James with a mansion of a house and a gold digger of a wife. He’s obnoxious and oblivious to the world outside his rich bubble that it almost seems understandable why he’d be framed for fraud. Hated by the public and the court system, he has 30 days before a decade-long prison sentence. Knowing in his heart that he is completely innocent, you’d think this is the part of the movie when Hart helps Ferrell uncover the true embezzler of the company ala Trading Places.

But, no, that wouldn’t be funny enough. Instead, our characters temporarily forget about that plot and decide to just prep James for prison. This is done so that there’s a very loose reasoning for Hart and Ferrell being thrown together and with a higher chance of low-brow jokes. For taking a major detour, the comedic situations are both limited and wasted. Hart’s character is a lower-middle class man who has little knowledge of thug life outside of watching Boyz in the Hood (and possibly Oz the way he can only relate to prison through rape jokes). Relying on the advice of his lesser family members, Hart has plenty of opportunities to fudge the information with the equally inept James. This is mostly glazed over and only addressed for a rare amount of laughs. Sometimes it’s cleverly amusing as when Darnell directly rips his backstory straight from Boyz in the Hood. Sometimes it’s just blatantly juvenile in which Darnell encourages James to have sex with a gay guy to practice for prison rape. At any rate, the batting average of the gags is incredibly low. When you need to resort to Will Ferrell dressing in Lil’ Wayne’s outfit for a laugh, it’s clear this movie is struggling for a laugh. The phallus jokes can only push the script so far.

Hart and Ferrell don’t seem to be as engaged with this script and I really do feel for them. It’s hard to be committed to such material that relies on tired stereotypes of black gangsters, latino gardeners, overly-sexual gay men and biker-bar white supremacists. It’s offensive without bite and raunchy without wit. The biggest crime of the picture is its waste. The angle of the rich and poor trying to connect for the common good is never taken advantage of. The chance for Darnell and James to have a buddy cop relationship is shoehorned in at the third act. In just two minutes, it’s clear who did the crime, what they need to prove it and how they need to get it. But if they just did that, the movie would only be 20 minutes long.

It’s clear that both are going to investigate who the real embezzler was in the first few minutes of meeting, but not before wasting nearly the entire picture with prison training. The element of training is inserted so that Ferrell can gain some fighting skills and so that the overly-simple investigation can be padded out. Who wants to see these two work together when they could be cracking bits about prison rape, black gangs and Darnell trying to assert his heterosexuality among gays? Also, the majority of James comedic appeal is that he is racist and makes obliviously offensive statements. Funny for a few minutes, tired for a 100.

Get Hard is about as funny as the laughs that can be mustered from that lame title. And if you think they only use that bit once in the movie, you’d be wrong. There are some very small laughs here and there, but you really have to fish them out of a plot that’s polluted with racism and homophobia to an absurd degree of stereotypes. Kevin Hart and Will Ferrell are too good to be wasted in a movie where one has to place a penis in his mouth and the other has to simulate rape with his hands for an extended period of time.