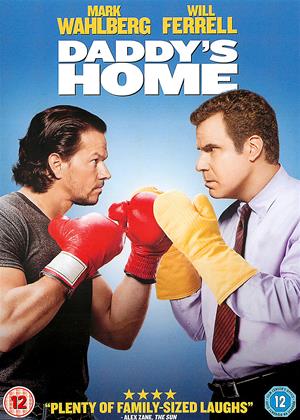 After The Other Guys, Ferrell and Waldberg are reunited for a comedy though not quite as funny, still has some great moments.

Pocket rocket Wahlberg meets podgy, but taller, Will. Quite good fun to be fair, and manages to keep motoring through.

Saw this at the cinema, not that funny. Too many contrived over the top scenes with little plot and Wahlberg doing what he does best being the cool, macho dude weaving between trying to be comical and menacing. Only saving grace is this is better then the sequel (god knows how that came about) which is completely missable. Trying to think the last time Will Ferrell was in a half decent movie.

Keeping with the formula of 2015’s duo comedies The Wedding Ringer, Get Hard and Hot Pursuit, Daddy’s Home is yet another flimsy plot to serve as a rickety platform for two comedic actors. Here we have Will Ferrell and Mark Wahlberg trapped in a sitcom plot where you wish they were given room for improv. As much as I’ve grown weary of the trademark trend of leaving the camera on far too long for improv, I find myself pining for the days of Anchorman and The 40-Year-Old Virgin. A thin premise for natural jokes is far more appetizing than this scenario which felt more assembly line with its mixed bag of comedy.

The premise comes off as a bit deplorable in its effort to reap laughs. Ferrell plays the meek step-dad Brad for his two step-kids. Wahlberg plays Dusty, the overly aggressive muscle-bound ex-husband that still loves his kids. Both of them clash in personality and physical forms for the love of the mother and her kids. While the primary goal seems to be about settling the love triangle, the majority of the comedic games are for the love of their kids. Each one tries to best the other for the prize of best dad. Dusty builds a tree fort and skate ramp for his kids in the backyard. Brad fires back with tickets to a Lakers game. Back and forth the spoiling goes with acid spit in each other’s eye at every turn.

Of course, the kids rarely question the situation. They’re far too happy receiving extravagant gifts from their two dads to feel any sort of concern for what they’re trying to do. Nor do Dusty and Brad consider how this will affect them in the long run. But that’s just overthinking a movie which mostly derives comedy from Will Ferrell either getting hurt or hurting someone else. After being swung the opposite direction on the best dad pengilm at the Lakers game, Ferrell drunkenly stumbles down to the basketball court and smashes two people in the face with basketballs - one being a cheerleader, the other an ill child. Wahlberg mostly stands around as the goofy muscle man, melding almost too well into the role of a man who can’t resist a fight or to pull his penis out. He even takes time out to boast his teaching skills before performing CPR on a dying Ferrell.

But the picture isn’t completely heartless for the sake of some shocking or mean-spirited laughs. It’s actually rather surprising how it avoids becoming much worse than it could have been. There are some attempts between all the gags to showcase a sense of fear and inadequacy in being a husband and a father. It’s a sentimental and a little forced, but it’s still admirable to watch Ferrell and Wahlberg flex a little bit of their drama muscles. Their funny bones are not too shabby either in how these two throw themselves into the gags with solid timing and slapstick. For the short leash the script puts on their characters, Ferrell and Wahlberg do rather well with the material handed to them.

Daddy’s Home is not as offensive or tiresome as it would lead you to believe, but it’s still a very passive bit of comedy. It proceeds on a simple course, connects all the dots of its scenario and ends with a predictable warmth among crass. Though ultimately forgettable, there are a handful of laughs to be had from such a lazy premise. The exact amount depends on how much you can laugh at a kid being knocked out of his wheelchair or a young boy kicking a girl in her genitals.