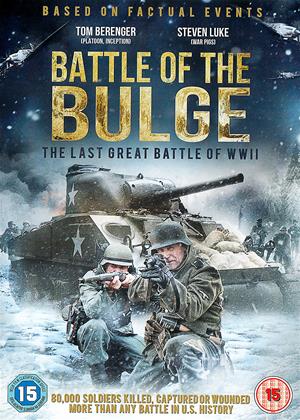 Reviews (6) of Battle of the Bulge

Worst war film ever - Battle of the Bulge review by PG

his is without doubt the worst war movie I have ever watched. The only saving grace was that it only lasted 68 minutes. The special effects looked like they had been done in a school. The repeating snow flake pattern superimposed afterwards, the German tanks and explosions looked so amateurish. The acting was terrible, hardly any signs of battle weary soldiers, clean faces, clean uniforms, it is a joke. Dialogue was limited to around five actors. The advancing German soldiers must all have have been blind not to have spotted the waiting US forces sat in such exposed positions. The military manoeuvres shown in the film are just so unrealistic. The people on here that have left five star reviews must have watched some serious sh....e to give this five stars. This is the first time I have ever left a film review but am flabbergasted at how bad this film is.

This has to bet the worst war movie or any movie come that, that I have seen. After 30 minutes a could not take anymore and turned it off. Horrendous acting, pathetic special effects and action scenes that could have been made by an amateur school production. Tom Berenger must have been short of a few quid to get involved in this utter garbage. Enough said.

Battle to Suppress Boredom - Battle of the Bulge review by KW

Was this a made for TV film that the TV companies rejected hence its appearance on DVD? Focusing on one very small price of action would have been fine if the story line had had any substance to it! The opportunities were there to expose the failings of the Allies in not realising what was taking place and almost allowing the Germans to break through, but was that not acceptable?

Trash - Battle of the Bulge review by DW

Not like the real war. - Battle of the Bulge review by Gwydion

No one ever achieved the 'kill ratio' shown.

It insults the memory of those who actually fought.

Wish I had not bothered with it.

This is a very poor low budget war movie. The title gives you the impression that you will be watching an epic movie, how wrong it is!

The story is about a small American unit who must on-rushing German in the Ardennes and ends with the infamous massacre at Maldemy.

The only good thing I can say about this movie was poignant end credits which inform you of the American soldiers who received decorations for their bravery during the Battle of Bulge which takes up about 10 minutes and is out of sync where the movie ends. Maybe the credit should also have named the American Soldiers who were massacred by the Germans.

If you want to watch a war film about the battle in the Ardennes, watch Ken Annakin 1965 film of the same name or the 1969 movie ‘Castle Keep’ with Burt Lancaster.