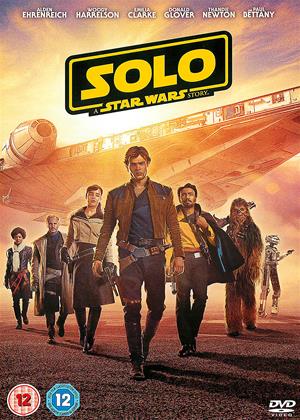 Rent other films like Solo: A Star Wars Story

Did nothing for me - Solo: A Star Wars Story review by RS

I'm a lifelong Star Wars fan and a costumer with the 501st Legion. I was hoping this film would capture the glorious retro-ness of the original trilogy like Rogue One did, and I hoped that Alden would capture some of the spirit of Han Solo. But nope. He could have been any other scruffy pilot flying round the galaxy. He didn't embody any of who Han Solo was. I wasn't expecting a blow by blow imitation of Solo but some mannerisms and gestures would have been good. The cockiness and arrogance just wasn't there for me. I was uninspired by the entire film. I will always wonder if Anthony Ingruber would have made a better Solo, he was amazing as Young Harrison in "Age of Adaline". I can see me falling out of love with Star Wars as Disney advance the franchise into new characters, new trilogies and leave behind the original stories.

I'd half a thought this film would be about fleshing out the character that is Han Solo, but in reality it's a generic sci fi outing that has someone called Solo in it.

It's not terrible, but you'd not want to watch it again. Much better than the Last Jedi though, so there is that.

Don’t listen to the critics, this film is very good.

Much better than all the other Star Wars spin offs, partly because it is a much simpler story to follow.

The special effects are excellent , the only time they go over the top is when Solo encounters a giant creature is space.

The acting is good, with Alden Ehrenreich a good fit as Han Solo, but Chewbacca stands out !

This turned out OK, bearing in mind all the issues with directors being fired during filming etc. My only criticism being that Alden Ehrenreich is totally miscast as Hans Solo - not only is he noticeably too short, but also too nice. I guess you could get away with Solo becoming grumpier as he got older, but he sure as hell wouldn't have grown 5 inches or so,

Not the best, but not the worst either! - Solo: A Star Wars Story review by CS

I had to watch this film twice before making my mind up and even now I'm still not sure what to make of it. Most definitely a spin off, but this one gets a lot more earthy and back to its roots. I thought the chap playing Han was totally mis-cast and the wrong actor for the part, although he did make an effort and do a fairly decent job, he simply don't fit the role physically or in looks! If you ignore all of the other films, this does well of its own accord. It's a bit fast, cluttered and choppy to start off with, I hate the current trend for fast editing where you don't actually see anything, its all implied, because things are happening too fast, but the film starts tools down a bit and get into its stride later on. Not a classic by any means, but a good Sunday afternoon viewing with the kids!

A Solo Adventure - but definitely part of the gang! - Solo: A Star Wars Story review by MD

Ignore the critics. You can definitely view this as part of the whole Star Wars universe or a "solo" space cowboy adventure.

The film does seem a bit disjointed at times but there's a lot of adventure and action so you can easily get past that.

The film did leave me feeling that I wanted a second part though. The revelation that Vos' superior was Darth Maul comes as a nice surprise, ut as soon as it's revealed it is abandoned. If this was revealed nearer the start of the film, or if hints were left, the film would feel more "complete".

This is an enjoyable film none the less.

After the dreadful Last Jedi I was worried about this. Its a very good Star Wars story.

If you hate Star Wars - you'll love this! - Solo: A Star Wars Story review by MW

Short & Sweat - I hate all of the Star Wars movies. But loved this!

If this is the theme of Star Wars movies from now on, the franchise has a new fan.

Blu-ray froze multiple times. Had to skip one chapter by rebooting the 4K player.

Atmos wasn't very interesting. Boy do I wish all movies could sound like Blade Runner 2049!

* does the Kessel run in 12 parsecs (which is a unit of LENGTH not time, btw)

And simply joined the dots. The 30 second long high point was how they introduced Chewbacca.

One for completists only.

Flying Solo....all on its own . - Solo: A Star Wars Story review by porky

Ok, well not a Good start as the First Copy sent me never arrived ,That should probably have been taken as a Warning !

Finally a DVD arrived and I put it on to play and found myself falling asleep to it.

I tried again t sit and watch t thinking maybe I was just tired , sat with chocolate and Tea and feet up and although my Eyes were looking at the screen absolutely Nothing was gong in.....it was like, ...well sooo Dull I couldn't compute it internally.

sat through all of it for some reason, I should have just turned it off but was just hoping for something to catch my imagination , and finally yes, a small segment in the second half had Robots freeing Robots from captivity,they were going crazy and breaking stuff and dancing on stuff and it was Joyous, I have absolutely No Idea why but they were and it was very funny, that lasted all of 5 minutes , then back to the dull sameness again. Don't even bother .

I have to say that it wasn't in any way Excruciating to watch like 'Phantom Menace' was ,it was just lifelessly Dull.

I can only imagine it must come as some great displeasure to Star Wars fans that the Han Solo prequel film is not quite the swashbuckling sci-fi western it promised to be. Some of that spirit is present and there are scraps of a charming adventure strewn throughout. But the abundance of references and callbacks keep hindering the excitement, pulling us out of the fun to learn such useless facts as to how Han Solo received his name. I doubt anyone was chomping at the bit to learn that info.

It’s quite a shame considering Alden Ehrenreich has the makings of a heartthrob of a hero. He plays Han Solo without much of the grumpiness, but plenty of cockiness and smolder that mostly comes through the screen. It helps that his story is an interesting one as well. He doesn’t start off with this story as an outlaw, but a slave worker that aspires to more. He also makes many mistakes, making his cocky attitude all the more unique when he has to work for that swagger of a scoundrel. He starts out as a slave, kicks around as a Stormtrooper, and recklessly jumps into the outlaw lifestyle when he finds a crew and a ship that’ll take him.

A few familiar characters pop up. Chewbacca, Han’s furry co-pilot, first meets the rogue in a pit where they must fight to the death. Lando (Donald Glover), the like-minded suave deceiver, first encounters Han at a card game with starships at stake. A few new characters crowd the screen, including Han’s love of the beautiful Q’ira (Emilia Clarke) and Lando’s love of the droid L3-37 (Phoebe Waller-Bridge). How does a relationship with a droid works? L3-37 insists “it just does” and leaves our imagination to fill in the blanks.

Solo is perhaps the most outsider of Star Wars movies as it doesn’t feature rebellious heroes fighting against the overwhelming Empire. Han is out to make some money and free Q’ira from the grip of crime lord Dryden Voss, played by Paul Bettany with red in his eyes and cat scratches on his face. He teams up with Beckett (Woody Harrelson), a season bounty hunter that teach Han all the tricks of the trade. Namely, always trick everyone. He also imparts important western logic, adhering to that familiar line from The Good, The Bad, And The Ugly; “If you gotta shoot, shoot; don’t talk.” And Han indeed shoots first, remastered Star Wars be damned!

The biggest hurdle for a prequel such as this is the lack of tension for how this story will play out and Solo stumbles over itself during its frisky sprint towards adventure. Hindering its originality is an insistence on placing origins on Han’s legacy we do not need. Who truly desired a scene where Han receives his iconic blaster? What’s the point of drawing attention to Chewy’s nickname after the two meet in a death pit? And why, above all else, did Han Solo’s very name require an explanation?

Thankfully, as the film progresses into its world of heists, pirates, and showdowns, there’s a certain groove the movie eases into. There are hints of Errol Flynn in a dashingly intimate moment between Han and Q’ira. There’s a gleeful chaos to a power plant infiltration where L3-37, in her justice-seeking programming, incites a riot of droids. The climax features so many showdowns, betrayals, surprises, and deceptions that it’s almost par for the course that the true villain of this picture comes entirely out of left field.

The film was subject to a Ron Howard reshoot after the studio wasn’t pleased with the more comical approach by comedy directors Phil Lord and Chris Miller. Sadly, it shows. Several scenes fall flat with humor and moments that would seem ripe for a gag are cut off just before they are dealt. This uneven direction coupled with bruising nudges of Star Wars callbacks makes Solo: A Star Wars Story a surprisingly flawed film with bursts of brilliance. There’s plenty of hints for the space western that could have made this Star Wars Story a great film, but that perfect film seems lost in a galaxy far, far away.