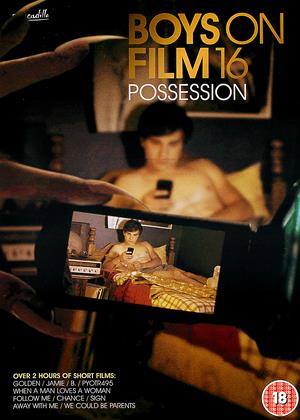 Synopsis:
As a brooding teenager, "Boys on Film" is celebrating it s (not so) sweet sixteen with an astonishing selection of the latest international gay short films. Featuring golden boys, teenage lust, self-conscious dolls, chance encounters and a vengeful creature, alongside a holiday romance and a young man s attempt to conceal his sexuality from his mum, "Boys on Film 16: Possession" is our most possessive collection yet.

Golden (Germany)
As a golden boy becomes a golden man, his carefree spirit wanes under the weight of being different. As he grows up he becomes more introverted until, one day he discovers he s not alone.
Jamie (UK)
Shy, quiet Jamie, spends a revealing afternoon with Ben after meeting on a dating app. As they chat, Jamie finds himself opening up and letting loose his hopes and fears in an unexpected awakening.
B. (Germany)
Torn between a cold relationship with K. and her feelings for another woman, shy and insecure B. is heading for a disaster. For too long she has suppressed her desire and lived a lie. But is it really too late for B. to follow her heart?
Pyotr495 (Canada/Germany)
One evening in Putin s Moscow, 16-year-old Pyotr is baited by an ultra-nationalist group known for their violent abductions and attacks on young gay men. But Pyotr isn t as defenceless as he might appear...
When a Man Loves a Woman (UK)
When Nick, who still hides his sexuality from his mother, gets a call to say she s coming to visit, he desperately turns to best friend Amanda to pose as his girlfriend. Nick must use charm, cash and emotional blackmail to convince a hungover and reluctant Amanda to continue the ruse.
Follow Me (Belgium)
Eighteen-year-old Jasper is madly in love with his art teacher. Overcome with confusion and longing, Jasper takes to following his teacher and his new girlfriend wherever they go.
Chance (UK)
Trevor's life has become a void, following the passing of his wife and long term companion, Doris. A chance encounter in the park with a mysterious stranger equally troubled by his own dark past jarringly reawakens him, and forces both men to live again.
Sign (USA)
When Ben summons up the courage to talk to Aaron at their local subway station he is surprised to find that Aaron is deaf. Despite the communication barrier love blossoms, but their very different worlds threaten to tear them apart.
Away with Me (UK, France)
Alex and Paolo have just hooked up in London. Despite only knowing each other briefly, Alex whisks Paolo away to his Aunt's home in Nice. Alex believes it s a holiday romance, but does Paulo feel the same?
We Could Be Parents (Sweden)
Marely left Erik when he found out he was selling himself for sex. Now, Erik s last chance to get Marely back is to make this film explaining the reason why; so that they could afford to become parents one day.
Actors:
Abs, Sam Atkinson, Alanna Bale, Susanne Bormann, Tommy J. Brennan, Diane Brooks Webster, Pär Brundin, Sebastian Christophers, Paul Clerkin, Björn Elgerd, Ezra Fieremans, Maximilian Gehrlinger, Jake Graf, Clifford Hume, Andreas Jähnert, Jakob Jörke, Maarten Ketels, Lee Knight, Karl Kreibich, Lien Maes
Directors:
Jake Graf, Kai Stänicke, Christopher Manning, Blake Mawson, Charlie Francis, Anthony Schatteman, Andrew Keenan-Bolger, Oliver Mason, Björn Elgerd, David Färdmar
Producers:
Kai Stänicke, Roland Fischer, Paul Ohmert, Patrick Burgenn, Sasha Fisher, Alisa Mandrovska, Blake Mawson, Cam McLauchlin, Natalie Novak Remplakowski, Hans Lucas, Sven Spur, Andrew Keenan-Bolger, Adam Wachter, Adam Kempton, David Färdmar, Eno Enefiok, Jen Kerrison
Voiced By:
Charlie Francis
Writers:
Kai Stänicke, Christopher Manning, Blake Mawson, Katie White, Anthony Schatteman, Stephen Dhondt, Adam Wachter, Oliver Mason, Björn Elgerd, Pablo Brandao, Jake Graf
Studio:
Peccadillo Pictures
Genres:
Lesbian & Gay

Sign up
Boys on Film 4: Protect Me from What I Want

Two standout films, the rest can be given a miss - Boys on Film 16: Possession review by MF

The early editions of this series contained some wonderful short films, such as "Cowboy", "Wrestling" and "Protect Me from What I Want" but many of the later editions include little which remain in the consciousness. This edition features two short films which are worth watching, "B" and "Chance", but the rest left me cold, except for perhaps "Sign" which was okay if not a little twee. I didn't even bother watching the rest of the Scottish one about a man trying to hide his (obvious) sexuality from his mother. I've had enough of ridiculous stereotypes. Two or three of them didn't even make sense and had no apparent plot line. Even a short film needs a plot of some kind. I would suggest doing as I do-start watching each film but if it you don't warm to it in the first minute or two, you probably won't end up liking it at all. Short films will continue to be made and they need an avenue in which to be seen, but whoever selects the films for inclusion in this series could pick more wisely.

Maybe 2.5 rating if I was being Generous - Boys on Film 16: Possession review by KW

this set I think was possibly the weakest I have seen in the series, with no real stand out film, but Chance and Signs were the two I enjoyed.

Overall this recent BOF collection is disappointing but there are 3 or 4 that are worthy of watching; Golden, Chance, Sign, We Could be Parents. A brief summary of all is as follows:-

Jamie (two guys; Jamie and Ben hooking up after meeting on a dating app; Jamie is still not out to everyone and opens up to Ben but film ends rather abruptly and could have been so much better)

B (short film with barbie type dolls; some rate this in the collection of these short films but I found it odd and pretty awful to be honest)

Pyotr495 (about a 16yo lad who’s baited by Russian homophobic thugs. It’s tense and very disturbing/upsetting, especially know this goes on in Russia but despite being beaten and humiliated there’s a very surprising and unexpected twist that sees the thugs get what’s coming to them)

When a Man loves a Woman (lad trying to hide his sexuality from his visiting mother by getting his best friend to act as his girlfriend. Humorous but dreadful acting)

Follow Me (student falling in love with his tutor and the infatuation that leads to him stalking the teacher and his girlfriend to fuel his fantasy. It’s filmed leaving you wondering if the fantasy game true or was it just a dream?)

Chance (two troubled men, for differing reason, meet in a park and strike up a relationship that awakens both of them from the voids in their life - nicely shot and the two characters deliver the emotions required to tell their beautiful tale)

Sign (despite the communication barriers between two men who meet, a great love story unfolds but comes under threat when their differences in life choices puts a strain on the relationship but love wins the day - sometimes words aren’t needed!!!)

Away with Me (A bit of a nothing story about two guys; disappointing)