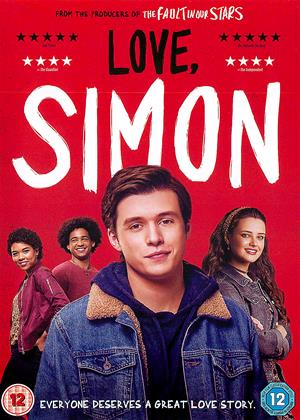 I really enjoyed this film - Love, Simon review by LJ

its funny, its sad and its lovely - was beautifully done as well and refreshing to see a coming out movie from a male point of view - the young cast were excellent and I would thoroughly recommend this film

I had concerns initially when the movie stated that it was going to be an annoying American High School movie with enough cheese to make you vomit but how wrong I was!!

It’s a fantastic coming-of-age film that has comedy elements throughout that makes you laugh out loud but also parts that tug at your heart strings and leaves you blubbering like an oversize baby.

What sets this apart from most coming-of-age movies and especially gay ones, is the very clever structure and the story that unfolds. It’s a stroke of genius by the director to come up with a storyline that not only kept you guessing throughout but that was also about two coming out stories in one.

I couldn’t fault any element of this movie and will most certainly recommend it!!

One of the very best films which I could watch all over again! A clever touching film that everybody should watch with a great feel good quality.

Not what I expected and all the better for it - Love, Simon review by KW

I was unsure what to expect of this film and what I was presented with went way beyond my expectations, once I got into the film! At first I was wary of thinking that we had another variation on the High School drama, but the film soon disproved that theory. A very enjoyable film that should not be missed.

I guarantee you will watch to the end - Love, Simon review by MI

A really well done film. You really do want to know who 'they' are, and I think I even shed a tear at the end.

Love Simon is the gay teen romance movie that walks that fine line between reality and fantasy. Sure, this scenario may not play out as wondrously in the real world but in the magical realm of romantic comedies, anything is possible. And this film has such a sweetness and honesty to its story that makes one believe a little magic like this is possible.

Simon (Nick Robinson) finds himself in the brighter version of a high school life. He’s an average kid in the sense that he has plenty of friends, a good relationship with his family, and a firm grip on technology. But he’s having trouble coming to terms with being gay. He’s known it for years but wasn’t too sure. He especially doesn’t want his joking dad Jack (Josh Duhamel) to find out, considering he keeps making jokes about masturbation and girlfriends. His feelings hidden, he retreats to the internet where he discovers someone in his school has secretly come out as gay, known only as “Blue.” Curious, Simon sends emails back under the name “Jacques.” They hit it off well but the mystery remains: who in Simon’s school is Blue?

While Simon tries to crack the mystery of the gay friend, he finds himself dealing with other problems in the ramp up to him eventually coming out. One student happens upon his emails and threatens to tell everyone in school Simon’s secret unless he helps the blackmailer get a girl, which isn’t easy considering this guy is obnoxious. He also weighs his options about who to tell and when, if he even has that option. And it won’t be an easy means of coming out with so much pressure of being teased and disowned.

This is a story that could’ve easily turned into a terrible afterschool special of melodrama about acceptance. This is thankfully not the case as Greg Berlanti adds just the right amount of normalcy, heart, and sweetness. A more cartoonish film would’ve made Simon’s coming out to his dad as an emotionally draining scene where dad freaks out and is frustrated. While Jack does turn into a mess at this news, it’s more out of feeling ignorant for not being the wiser and trying too hard making hetero jokes around his son. Maybe it’s not a common scene in movies about gays but maybe it should.

Berlanti also has a strong enough edge on youth culture to make the high school feel more relatable than trying too hard to be hip. The students are treated as real people with feelings that go far past hashtags and buzzwords. That embarrassment is reserved for the principal of the school perfectly played by Tony Hale trying too hard to relate. He means well but just doesn’t have the right lingo when it comes to addressing topics of being gay. And that relatable atmosphere of likable characters with dimension makes the humor come as a welcoming embrace to the romance and drama at play.

There’s a big market for gay teenage romances in Hollywood movies and Love, Simon is thankfully one that doesn’t have to settle for watering itself down or coming off as preachy melodrama. While I’m sure coming out isn’t this easy, perhaps there’s an insistence present that suggests a better world where homosexuality need not be relegated to secret emails and shameful dreams. And given the moderate success of the film, perhaps there should be more romantic comedies this insightful, touching, and amusing.