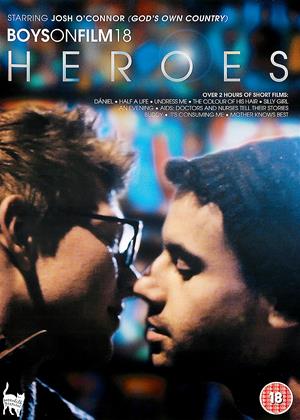 Synopsis:
"Boys on Film" comes of age with ten uplifting and powerful tales recounting the lives of everyday heroes with no special powers except striving for their own identities and fighting for the right for us all to be ourselves.

Daniel (UK, 2015)
Daniel is studying in London while working part-time as an escort. He is invited to a lunch by his best friend Nori. She surprises everyone by introducing her new lover Tom, with unforeseen consequences.
Buddy (The Netherlands, 2015)
When a young man is asked by his ex lover to support him during an HIV test, he sees an opportunity to find out if there is still a chance for reconciliation.
Half a Life (Egypt, Indonesia, USA, Netherlands, 2017)
Pairing the intimate narration of a young, Egyptian gay activist with a highly stylized animation, 'Half a Life' brings the streets of Cairo to life through this firsthand account of the increasingly oppressive social climate of Egypt.
Undress Me (Sweden, 2013)
When Micke meets Mikaela on a night out, he is immediately attracted to her, as he can sense that there's something different about her. When Mikaela explains that she is trans he gets confused, aggressive and also curious. 'Undress Me' examines and challenges our perceptions of gender.
The Colour of His Hair (UK, 2017)
Based on an unrealised film script written in 1964, when homosexuality is still illegal, 'The Colour of His Hair' merges drama and documentary into an impressionistic meditation on queer life before and after the partial legalisation of homosexuality in 1967.
Silly Girl (UK, 2016)
'Silly Girl' is all about the first time you are noticed, that first time someone sees you for who you are and the transformative nature of that moment. From the Director of 'The Levelling' and co-written by Game of Thrones' Ellie Kendrick.
An Evning (Denmark, 2016)
Frederik has had sex for the first time with Mathias, his friend from school. Whilst Mathias embraces what they have done and is keen to move forward, Frederik struggles to understand his own feelings and his newfound desire for Mathias.
Aids: Doctors and Nurses Tell Their Stories (UK, 2017)
For the first time, doctors and nurses who cared for Britain's first AIDS patients in the 1980's tell of the extraordinary situation they found themselves in and the rules they had to break to help patients forgotten by the state.
It's Consuming Me (Germany, 2012)
From the director of B. A young man obsesses over his ex-lover as he takes us through a collage of memories, the highs and lows of their relationship and images of his ex-boyfriend's new life with his new lover.
Mother Knows Best (Sweden, 2016)
Starring Alexander Gustavsson from Girls Lost. A mother gives her teenage son some friendly advice on their way home from having met his boyfriend for the first time, but this innocent conversation leads to revelations that threaten to completely change their relationship. Winner of Iris Prize 2017.
Actors:
Balázs Csémy, Peter Faulkner, Henry Garrett, Tim J. Henley, Mimi Kovacs, Éva Magyar, Julia Papp, Hilda Péter, Alex Reece, Ádám Tompa, Jason Barker, Ciara Baxendale, Daniel Cornelissen, Jana Bringlöv Ekspong, Björn Elgerd, Karl-Erik Franzén, Volkmar Leif Gilbert, Alexander Gustavsson, Sean Hart, Mollie Lambert
Directors:
Sam Ashby, Niels Bourgonje, Mikael Bundsen, Hope Dickson Leach, Søren Green, Victor Lindgren, Dean Loxton, Alejandro Medina, Tamara Shogaolu, Kai Stänicke
Producers:
Elizabeth Boag, Dean Loxton
Writers:
Sam Ashby, Niels Bourgonje, Mikael Bundsen, Hope Dickson Leach, Søren Green, Victor Lindgren, Dean Loxton, Alejandro Medina, Tamara Shogaolu, Kai Stänicke
Studio:
Peccadillo Pictures
Genres:
Lesbian & Gay

Vast Improvement on some of the more Recent Issues - Boys on Film 18: Heroes review by KW

3 of the films stood out for me, the Animated Half a Life, The Colour of his Hair, based on a film script that was never made by a family member of Lord Montagu of Burley and AIDS: Doctors and Nurses Tell their Stories. Of the remainder some were more watchable than others, but compared to some of the recent issues in the series this was a far better collection and did not have me wondering why I had chosen the disc to watch!

Worth a watch - Boys on Film 18: Heroes review by sc

This one is worth a watch JUST for the film about the nurses who helped the aids victims back in the 1980s.

One of the better ‘Boys on Film’ collections - Boys on Film 18: Heroes review by TB

I have reviewed all films against the summary given for each short film on this website.

1 out of 5. Story didn’t really go anywhere after it had set its premise.

3 out of 5. The varying and differing feelings between the two characters (ex’s) and the somewhat tetchiness and nervousness of the situation came across and was acted out well. Not a bad short film that was believable and left you feeling sorry for the supportive ex.

4 out of 5. The narration and animation gave a different and intriguing concept to this short gay story and delivered the key issues that the film was trying to get across well. Issues such as cultural differences in certain countries (Israel in this case), acceptance and understanding (or lack of in this case) and good humanity being punished because of those cultural differences, backward views and a lack of understanding and acceptance. An upsetting film that gives us a stark reminder that homophobia and discrimination is still rife around the world.

4 out of 5. An interesting and very thought provoking character assessment of two people. In giving an example of one of many possible ways of approaching, dealing with and understanding the situation, having discovered that someone you’re attracted to is transgender. How would you react? I liked this.

The Colour of His Hair:-

3 out of 5. The mix of documentary and drama worked relatively well to tell this true story of an important and key period when homosexuality was finally and correctly legalised. However, in my opinion a short film isn’t the best carrier or way to deliver a subject that needs more time and depth given to it. The acting was okay, the set design and clothing brought the era to life and the real life elements (footage, clippings, etc) brought it all together.

1 out of 5. Very short, hollow acting and all a bit pointless to be honest.

4 out of 5. Those first experience, those first thoughts and the questions in your own head about what happened and how you felt and feel. This film delivers that moment in a beautiful and poetic way with solid acting performances, that bring the youthful emotions alive and great cinematography.

5 out of 5. A heart wrenching but also heart warming documentary about the doctors and nurses who cared for and showed great humanity towards people who had a disease that was a new epidemic and that still wasn’t fully understood at the time. Their compassion for those who had been cast aside, makes this short film a very rewarding watch.

3 out of 5. A bizarre reliving of memories of a past relationship. Certainly different but I’m sure it’s something we’ve all done. Very short but cleverly done.

3 out of 5. That mother and son conversation with all the questions that I could certainly relate to in some cases when I came out and my mum met my first partner. Well acted in a tense car ride scene.