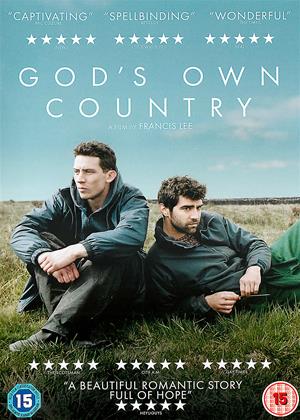 Quite possibly the BEST British film with a gay theme. Its up there alongside Merchant & Ivory's ' Maurice' and Dirk Borardes 1961 groundbreaking 'Victim'. Owing much to Brokeback Mountain- it is a far more realistic representation of a gay man's life- growing up in a close-knit family farm on the North York Morors in the UK. The direction is excellent- as is the cinematography and acting. Really my only criticism would be over the 'deleted scenes'. Personally I don't think any of them need to have been deleted! Highly recommended.

A rather familiar storyline very much based on Brokeback Mountain and some of the scenes and motifs are a direct lift - strip down washes in a bucket, skinny dipping, left behind clothing - but I don't think this detracts from the story. Unlikely to do much to encourage people to take up farming in Yorkshire amongst the racists in the pub, it is a touching story of how an emotionally repressed young farmer gradually realises that he needs help and support from an immigrant worker with whom he has developed a relationship more meaningful than the quick shags in the back of his trailer or in pub toilets. Good performances from the two leads but strong support too from Gemma Jones as a grandmother who knows more than she lets on and Ian Hart as father incapacitated by a stroke.

Brokeback Mountain in Yorkshire - God's Own Country review by JR

This is basically a Brokeback Mountain set in Yorkshire. But unlike Brokeback, which looked like and advertisement for Ralph Lauren clothes, this film shows the hardship and isolation of fell farmers. But it's preoccupation with mud, muck and all types of human body fluids was hard to stomach.

This film is not ‘shite’. In any way.

A story of a tough rural upbringing and the strains of relationships therein.

The way the director develops the relationship between Johnny and his love, and his dad, is masterful.

And...there is the ending, which to avoid spoilers, is untypical of gay themed movies.

Loved it! - God's Own Country review by JM

Absolutely loved this film- thought it dealt with the subject matter with sensitivity and although gritty at times was brilliant on a number of levels.

To call this film a Yorkshire version of Brokeback Mountain, serves as a massive discredit to what is an excellent film. Brokeback Mountain was a good film but was pretentious and over dramatised in places as per most Hollywood films. Whereas this film was believable, raw and emotional. It also had exceptional cinematography, which could have easily of seen the film play out without any words needed at all.

The acting was solid by all four of the main characters to deliver two key relationships in the film with great quality. The relationship between the father and son was tense and heartless but became so beautifully tender in the end. While the homosexual relationship between the son and the new farmhand had scenes that were poetic and powerful as two different characters battled with each other along their journey, seeing the troubled son going from an angry, lost and confused young man to someone who wanted to become a man and someone who had been deeply touched by the love and affection he’d never seemingly been shown.

Off to a Bad start - God's Own Country review by CH

Not prepared (my fault) for the opening of this story, which I put on in my living room to entertain visiting relatives. Taken aback by the graphic scene of seduction (?) or rape(?), due to the howls of disgust/dismay during the first few seconds, I pulled the plug and suggested Scrabble instead. Posted it back in the hope of getting Christopher Robin next time!

Now have read the reviews, so shall re-order when I know I'll be the sole viewer!

Art, agriculture and amour - God's Own Country review by mc

The film appealed to me because I am gay, I was a farmer (although that farm could never support the family and the foreigner) and I love such beautifully filmed landscape

Nice outdoor scenery! - God's Own Country review by BE

Extremely bleak representation of the life of a farmer and his elderly parents on a Yorkshire farm. The introduction of a Rumanian worker into the household brings some love interest into the farmers life.  There  are some harsh farm animal scenes and there is no humour whatsoever. Nevertheless, it is very well acted and it has an acceptable ending but I wouldn’t want to watch it again

Bleak beauty of North of England, loneliness and love. I enjoyed this film. It was spare but strong.

God's own - God's Own Country review by PB

"God's own country" is a poignant,sensitive exploration of a young man's emotional arousal amongst the bleak harshness of a Dales landscape. "Call me by your name" addresses similar issues in a sun-kissed Italian setting brimming with warmth and aspiration. In "God's own country" the catalyst to ignite the protagonist's emotions is absent; even the somewhat minimalist "ambient" sound-track embodies this absence. The inexorable challenge to existence imposed by the adversity of the Dales tightly constrains the young man's emotions, tethering them to episodes of drunken self-gratification within the confines of a pub's toilet-cubicle. But a chance event brings to the Dales farm a Romanian "casual" worker who not only "unlocks" the young man's eyes to the beauty of the landscape , but also liberates his passions, and, inevitably his vulnerability.