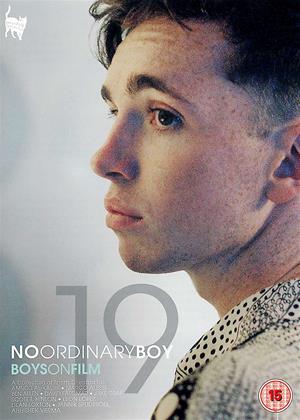 Synopsis:
As 'Boys on Film' reaches the end of its teenage years, we take a look at those unique boys; Boys who will go one step further, who excite, invigorate, and always impress. Boys who break boundaries, shape their worlds and are more than what they appear to be…

Michael Joseph Jason John
A single man imagines how life might be with a mysterious stranger he picks up on the New York City subway. A romantic thriller exploring one-night stands and the inherent thrill and risks of our hook-up culture.
The Fish Curry
Having decided to come out to his parents, Lalit spends the day cooking his father's favourite dish, Maacher Jhol. He pours his heart and soul into the meal before serving his father the delicious fish curry, but will his dish be more palatable than his confession?
Blood Out of a Stone
Because first impressions matter Michael sets Dan a challenge on their very first date together. But Dan is out of his comfort zone; he isn't used to dates requiring such vulnerability. East London provides the backdrop to this intimate story of immediate "connection".
No More We
After Hampus declares "There's No More We" he feels total relief, the weight of their destructive relationship slips off his shoulders. For his fiancé Adrian it's a devastating shock. How can they now help each other navigate the beginning of the end?
Between Here and Now
Visiting Copenhagen, Tony meets local boy Oscar at a bar. Initially cautious, Tony finds himself drawn to Oscar and their relationship rapidly intensifies; they want each other, they need each other, but can each trust the other?
Run(a)Way Arab
As drag queen Queen Za Dream prepares to go on stage, she recalls the joy of being an 8 year-old boy helping her flamboyant Iraqi-Egyptian mother get ready, and the transgressive moment that broke their close bond. 'Run(a)way Arab' is a semi-autobiographical film from British-Iraqi director Amrou Al-Kadhi.
Meatoo
A naive actor auditions for a film which could launch his career. The things he's asked to do make him more and more uncomfortable, until a choice remark from the director makes him see red. Based on a real event, 'Meatoo' is an improvised film that was conceived and shot in a day.
Dusk
Growing up in 1950's England, young Chris Winters struggles to fit into the gender roles dictated by wider society. When Chris meets dream woman Julie, life lightens a little, but the growing feeling that theirs is a life half lived haunts Chris. They start to imagine what might have been…Starring Duncan James (Hollyoaks).
Jermaine and Elsie
Elsie is fiercely independent, but due to a drink problem, is now reluctantly reliant on carers. When Jermaine, a black, sexually ambiguous carer arrives she gives him hell, but patient and caring Jermaine quickly wins her over. When Jermaine disappears without a word, Elsie makes it her mission to find out what happened to him.
Four Quartets
Raf is young, he's fun and on the pull, but tonight is struggling to find his place among the crowd. Sometimes it's that moment when you stop trying that magic really strikes.
Actors:
Oisín Stack, Alex Austin, Amber James, Scott T. Hinson, Eric Robledo, Jonathan Andersson, Björn Elgerd, Francesco Martino, Peder Bille, Peter Oliver Hansen, Amrou Al-Kadhi, Omar Labek, Ahd, Sally Bankes, Ashley Campbell, Marji Campi, Suzie Chard, Tricia George, David Lumby, Helen Rigby
Directors:
Ben Allen, Scott T. Hinson, Abhishek Verma, David Färdmar, Jannik Splidsboel, Amrou Al-Kadhi, Leon Lopez, Marco Alessi
Producers:
Jack Holden, Alastair Mavor, Matthew Drennan, Scott T. Hinson, Victor Mignatti, Dora Naughton, David Färdmar, Lis Svensson, Pernille Munk Skydsgaard, Jannik Splidsboel, Savannah James-Bayly
Voiced By:
Josefin Neldén, Amar Chaudhary, Suraj Ghosh, Deepa Kumar, Rajesh Pawar, Ajay Singhal
Writers:
Ben Allen, Scott T. Hinson, David Färdmar, Jannik Splidsboel, Amrou Al-Kadhi, Ashley Campbell, Adele Silva, Marco Alessi, Abhishek Verma, Jayesh Bhosale
Studio:
Peccadillo Pictures
Genres:
Comedy, Drama, Lesbian & Gay, Music & Musicals, Romance, Thrillers

Rent other films like Boys on Film 19: No Ordinary Boy

Nothing Outstanding - Boys on Film 19: No Ordinary Boy review by KW

The usual mix of films covering all kinds of scenarios, and whilst they were watchable, for me personally, none of them were what I class as outstanding and could lead to a fuller length version being produced!

Only One Good One - Boys on Film 19: No Ordinary Boy review by WH

Only 2 stars because - to save yourself wasting your time- there is only one of these short pics worth watching and that is Jermaine and Elsie. It lasts about 30 minutes.