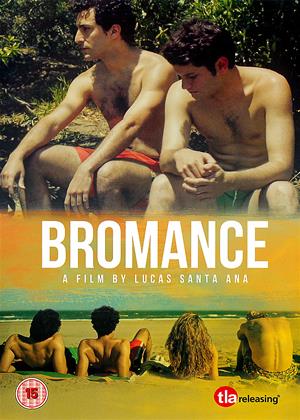 Synopsis:
When four friends go on a camping trip in a remote part of Argentina, sexual tensions quickly bubble to the surface. Once in virtual seclusion by the beach, Juli (the only girl) quickly recognises that that the boys seem to have a closer relationship than what she would consider 'normal'. The line between friendship and love fade further for two of the boys in particular as their desire becomes too much to bear. When what started as a simple getaway quickly becomes tinged with sex, romance, and conflict, everyone is forced to confront who they really are for the very first time.
Actors:
Javier De Pietro, Agustin Pardella, Luana Pascual, Marcos Ribas, Alberto Masliah, Lucas Santa Ana, Ivan Masliah
Directors:
Lucas Santa Ana
Producers:
Alberto Masliah
Writers:
Diego Mina, Lucas Santa Ana
Aka:
Como una novia sin sexo
Studio:
TLA
Genres:
Comedy, Drama, Lesbian & Gay, Romance
Countries:
Argentina

Bromance is a pretty decent Argentinian film that – let’s not beat around the bush – depicts gay love. It is directed by Lucas Santa Ana and features some darn good writing that makes you sympathize with the characters on a deeper level than what is normally the case. As a matter of fact, the acting in this film is superb and nuanced, oftentimes using the natural landscape to emphasize the character struggles and lead to some unforgettable moments on the screen. To this extent, for anyone interested in gay flicks, this would probably be one of the better indie films in the last decade or so.

The film is set in the 90s (1996 to be precise), with its main focus cast upon three boys who struggle to make sense of their inner feelings about their sexuality. Or at least, one of them does. This boy does the ‘coming out’ in a defiant and brave manner, and saying more would probably spoil the experience of actually watching the film.

Granted, Bromance is not a film with lengthy ‘sorkinian’ dialogue, but it’s rather a very quiet film that features character introspections on a very deep and poignant level as well. Perhaps it would be fair to say that Bromance is an extensive analysis of the psychology of the main character, told through the perspective of several external events that happen to cast a shadow upon his torn identity: who is he, and what does the world what of him to do?

That is, until a girl arrives on the scene.

When Julieta (excellently played by Luana Pascual) enters the film, she rocks the world of all three characters and introduces some darn hefty conflicts during the latter half of the movie. Her performance is magnificent and probably overshadows the leads by a significant stretch, which is somewhat ironic considering Bromance to be a film about gay love.

For those looking for some hot bedroom action – Bromance does not offer such indulgence and it would be probably for the best if you skip the film if you’ve come into it with that kind of a mindset.

In addition, despite being a low-budget film, Bromance is made pretty decently, where it seems like the director knows what he’s doing (which is always welcome for a change – especially true when so-called ‘indies’ are involved). The sound, cinematography, lightning, and locations are diligently done and convey a real sense of, well, realness that spills off the screen and into the viewer’s lightning sockets (of course that I’m talking about eyes).

With all of that being said, if you’re into gay stuff, feel inclined to watch Bromance with a friend or two – preferably Saturday or Sunday night.