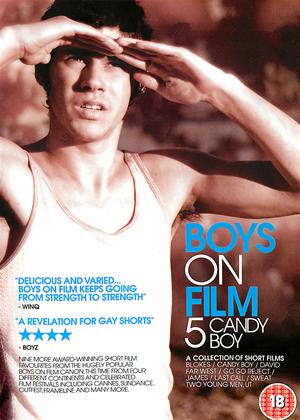 Candy Boy - France (2007)
Panic at the orphanage! Children start falling mysteriously ill left right and centre. Candy Boy, the most valiant of the orphans, leads the inquiry. But our hero s investigations are complicated by the arrival of a beautiful new resident...
Two Young Men, UT - USA (2009)
Will and Eli meet by chance in a bar and head to the salt flats searching for a party. In the process, however, they take the first steps towards finding and accepting themselves.
Blokes - Chile (2010)
Santiago, Chile, 1986. Blokes tells the story of the sexual awakening of a boy during the dictatorship of Augusto Pinochet. Desire can result in a very different outcome depending on the moment that you live.
Last Call - USA (2009)
After a tragic accident, Gavin is offered the chance to re-live three memories he shared with his ex-boyfriend, who recently passed away, by a mysterious bartender. Gavin takes the offer, but Fate has other plans...
Go Go Reject - USA (2010)
Daniel Ferguson yearns to leave his job at Yogurt World and fulfil his childhood dream of becoming the Jennifer Beals of male go-go dancing, yet his Flashdance fantasy comes a cropper when the clubs specify only muscular dancers. Undaunted, Daniel turns his small frame into a huge success.
David - Mexico (2005)
Unemployed businessman José, looking for work in the city, finds instead David; a much younger man who whilst mute, has no problem in communicating his desire for sex. Roberto Fiesco is the producer of Broken Sky, Bramadero and Raging Sun, Raging Sky.
Far West - France (2003)
Eric is forced to spend his holidays on his grandfather s farm in the countryside. Bored out of his mind, an unexpected visit from OTT friends Mika and Koko, and the appearance of a hunky farmhand, pull Eric out of the doldrums.
Sweat - UK (2009)
Starring David Paisley and shot in the bath houses of London s Vauxhall, Sweat portrays Simon s first steps in the sauna scene. How much trouble can one boy get into, or out of?
James - Northern Ireland (2009)
Focusing on a boy in Northern Ireland isolated by his sexuality and alienated from his family due to his parent s marital troubles, James reaches out in desperation to his teacher for support and guidance.
Actors:
Korken Alexander, Josh Babich, Chloé Berthier, Julien Bouanich, Pedro Campos, Heath Daniels, Marie-Christine Darah, Alfonso David, David Devora, Travis Dixon, Javier Escobar, Jorge Adrián Espíndola, Tom Frederic, Art Gager, Julien Gauthier, Margaret Goodman, Tony Granger, Gilles Guillain, Jean Haas, Jody Jaress
Directors:
Nadav Gal, Marialy Rivas, Pascal-Alex Vincent, Michael J. Saul
Studio:
Peccadillo Pictures
Genres:
British Films, Lesbian & Gay
Countries:
UK

Rent other films like Boys on Film 5: Candy Boy

Sign up
Boys on Film 4: Protect Me from What I Want