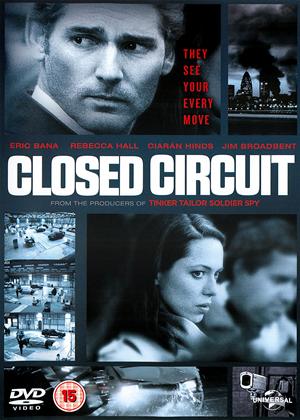 Crafted as a political paranoia film, Closed Circuit is an underwhelming piece of supposedly British cinema that features one of the worst British accents committed to film and some truly terrible dialogue that makes high powered lawyers out to be imbeciles who when asked probably wouldn’t be able to tie their shoes.

The film follows Martin Rose (Eric Bana), a British barrister assigned the high profile case of a terrorist responsible for the bombing of Borough Market and how his involvement causes a chain reaction of murder and betrayals as Martin tries to keep fellow barrister and one time lover Claudia (Rebecca Hall) safe from the maelstrom of disaster that follows in his wake.

While Bana is a solid performer he is trapped between two voices as his quintessentially British lawyer drifts into his native Australian more often than not. Hall adds class to the proceedings as the much needed idealist caught up in matters of national security but the films shoddy dialogue makes their serious and contemplative performances lack muster.

The films overall message of the dangerous nature of our security state intrigues at first but it’s backed up with thinly veiled metaphors and speeches that feel tacked onto this awfully generic thriller. The constant use of security footage makes the films 2nd act incredibly tense and engrossing but it leads into a final act with no payoff.

Ultimately the film feels like a smart idea, a deep look into the pros and cons of the world we live in but it does nothing to prove its point thanks to a script too invested in the plot logistics, of which there are surprisingly very few. It’s a film filled with good intentions but its key draw is squandered. It’s a film striving to be like this years Welcome to the Punch but in the end its just a little too closed minded