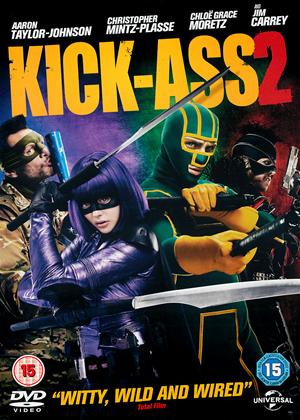 Simply put if you liked Kick-Ass, you'll like this. I know the movie was supposed to focus on Kick Ass (Aaron Taylor Johnson) and his superhero adventures, but I found myself more interested in Hit Girl's (Chloe Grace Moretz) trial of trying to become just a normal teenager. I would comment on Jim Carrey's part, but in all truth there wasn't really enough of him, saying that as Colonel Stars and Stripes he has an interesting four legged partner who does an interesting trick when called upon. The fight scenes were done well, as were the special effects. Scenery, costumes and story line were all up to the job.

Overall this movie isn't meant to be serious and it isn't, it is exactly how it's genre has it described.

Would I watch it again, of course I would, because it is true to what it is supposed to be.

What a disappointment after the first Kickass. Lacks a coherent plot, just puerile. Fight scenes were quite good, but again nothing like as well choreographed as the original film.

Kick Ass was dirty, it felt messy and it had a mind of its own with its almost deranged characters, its over the top set pieces and its vivid filming style. It’s predecessor however is a different monster, it’s neater, it builds up in predictable ways with characters too tepid to surprise, let alone cause the kind of controversy the first instalment caused.

The film follows the titular Kick Ass (Aaron Taylor Johnson) as he carries on down his path of becoming the hero he got a taste for when he helped Hit Girl (Chloe Grace Moretz) take down a deadly drug kingpin. While Kick Ass struggles with his training and his many secrets, Hit Girl tries to live a normal life although the rise of a deadly force of villains led by The Motherfucker (Christopher Mintz-Plasse) could derail both of their journeys

While just as vivid and colourful, Kick Ass 2 can’t quite get a grip on what exactly its trying to say as the film unspools the same tired hero grandstanding and ideals you would expect in films such as Christopher Nolan’s Batman trilogy. This preposterous story of a naive young man pushing himself to become a superhero is supposed to be silly and the stylized action does add a touch of idiocy but when your main heroes regularly start babbling about what it takes to be a hero, the joy of a story outside of reality, a tale of surreal victory over evil by doing moderately evil things yourself, vanishes into the ether.

It’s not that the whole film lacks purpose, in fact the introduction of some interesting characters such as Jim Carrey’s ex mob enforcer Colonel Stars and Stripes make for some entertaining moments but the supporting cast isn’t on screen long enough for them to have an impact. Carrey’s presence feels more like an extended cameo instead of a real supporting role and Clark Duke lacks the pithy venom he had in the last film making Marty a genuine bore, something indicative of the way I felt leaving Kick Ass 2, like all the life had been removed from a franchise brimming with potential