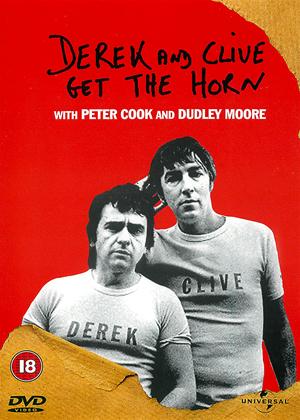 Synopsis:
This is the last authenticated sighting of the legendary Derek and Clive. They were not on good terms and were in the process of breaking up but Virgin lawyers and a SWAT team persuaded them to show up at the Town House Studios in the Goldhawk Road, Shepherd's Bush. Don Everly was in Derek's limo whilst Phil administered oxygen to Clive in a stretched caddy. Contractually both superstars were entitled to enter the studio first and the multiple pipe-up that ensued is still talked about in police circles. It took all the diplomatic skills of director Russ Mulcahy (later to make the less visually exciting 'Highlander' with Sean Connery) to get the pair into the studio.
The recording was fraught. They left as they arrived in separate cars, surrounded by armed bodyguards, accountants and members of The Ealing Golf Club. For the past thirteen years there have only been rumours. Derek was allegedly seen at group therapy in Malibu with Barbra Streisand. Others claim that Clive has embraced satanism and is living with a 12 year old in Manila. In 1980 security cameras captured a blurred image of a caucasian male resembling Clive on a luggage carousel at Heathrow shouting obscenities. He was urging Richard Branson to start an airline - "It can't be *ucking worse than this one!" Despite the best efforts of Interpol, the CIA and the ruthlessly professional Cilla Black organisation, their whereabouts are still unknown, so Universal have decided to release the video as a 'tribute' to the 'Sultans of Sleaze'. A proportion of the royalties (100%) will go to Universal and the remainder will be put in the trust for the Derek and Clive Charitable Foundation.
Actors:
Dudley Moore, Peter Cook, Richard Branson, Nicola Austin, Judy Huxtable
Directors:
Russell Mulcahy
Producers:
Dudley Moore
Writers:
Peter Cook, Dudley Moore
Studio:
Universal Pictures
Genres:
Comedy

Reviews (1) of Derek and Clive Get the Horn

This film seems to be extraordinarily popular with a very small minority who love it to bits. Everybody else should be aware that it's the comedic equivalent of torture porn. This is a documentary about two legendary comedians sitting in a studio for two days while they record an album, and discovering in the process how much they've come to hate each other. It was meant to be three days, but Dud walked out because he couldn't stand another minute in the same room as Pete. Apart from a few minor guest appearances, what you are watching here is the ugly, bitter end of the 20-year Pete & Dud partnership, and the effective death of Peter Cook's entire career.

Dud was a totally unexpected rising Hollywood megastar. Pete was a critically acclaimed comic genius with no career management skills and alcohol and mental health problems who was suddenly in the shadow of the partner he'd always regarded at least partly as a stooge. Desperate for money, Pete begged his old buddy to record one last album with him, and then, apparently under the influence of either serious amounts of booze or total insanity (or indeed both), took the opportunity to pour out all the envy and resentment he'd built up in an utterly deranged flood of bile until his best friend walked out and barely talked to him ever again.

Hilarious, no? Actually, it does have its funny moments, when the gleefully filthy sketches spark a little bit of the old cameraderie. But nearly all of this material is available, some of it in extended versions, on the CDs "Ad Nauseam" and "Come Again", minus the ugly, tedious bickering in between. And even when they're recording, too often Pete simply screams at Dud in a truly pathological manner. As for Dud, his constant mirthless laughter seems to be provoked more by nervousness than amusement, and at one point he has to be talked out of leaving halfway through both the album and the movie. Mind you, when it gets to the stage where your co-star is deliberately spitting chewed-up food into your hair, walking out is probably your best option.

It was actually illegal to own or watch this film in any form until 1993, due to its combination of almost non-stop incredibly strong language, and a very crude discussion about the sexuality of Jesus Christ at a time when blasphemy was still a crime. Perhaps that's why some people think it's a good film. But really, it's mostly just depressing. Russell Mulcahey, who also made "Highlander", its terrible sequel, and lots of movies you've never heard of for a very good reason, points the camera in roughly the right direction and hopes for the best. Third-billed Richard Branson (yes, that guy!) pops up very briefly as the perpetrator of a practical joke Dud isn't amused by in the least. Dudley Moore grits his teeth and tries to bear it, but can't. And Peter Cook makes you like him a lot less than you did before watching this film. So don't.