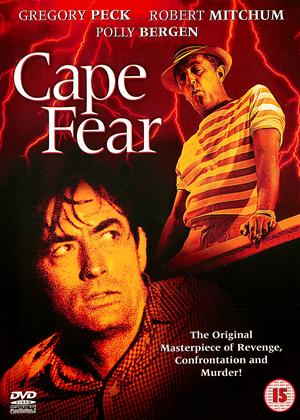 Remade in 1991 starring Nick Nolte and Robert De Niro, this is the original 1962 version with Gregory Peck and Robert Mitchum.

Max Cady (the baddie, played by Robert Mitchum) is released from prison after serving 8 years for rape [Aside: the words 'rape' or 'rapist' are never mentioned in the film, courtesy of the censor. The words 'attack' and 'attacker' are used instead - but from the context it is always clear what is meant]. Baddie begins to stalk attorney Sam Bowden (the goodie, played by Gregory Peck) and his family. Bowden testified against him in his trial for an 'attack' leading to Cady's conviction.

The law can't protect Bowden's family from the stalker and neither can taking matters into his own hands. The climax comes on a houseboat on the Cape Fear River, North Carolina - or in this version, on the river bank as the two main characters fight. Clearly, it is always going to be the goodie who wins, but nevertheless the tension is maintained until the end.

Of the two versions I much prefer the original. Filmed in black and white, the acting is more restrained, the baddie more realistic - and equally as menacing. In the remake, the Robert De Niro baddie is just too over-the-top - here, while still relentlessly threatening he appears far more menacing when acted by the more restrained Robert Mitchum.

Telly Savalas (with hair!) has a small part as a private eye.

The film was given a X certificate on its release in the UK and the BBFC site lists the film as some 3 minutes shorter than the video version. Quite what was cut is not clear - by today's standards the violence is restrained, even though the subject matter is still disturbing.

Directed by British director J. Lee Thompson and well lit and photographed, this is an excellent film with a score by Bernard Herrmann that adds to the air of menace. 4/5 stars. Highly recommended.