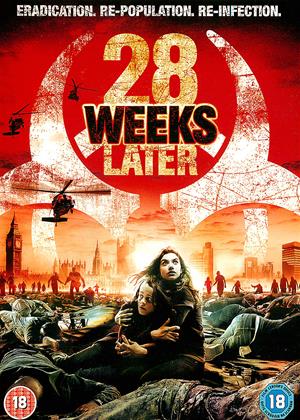 An interesting story with some bits that make you wonder how far you would go in order to survive. It is pretty gory in places and I had to look away from the screen a few times! The ending really makes you think Oh....My...God!

now, was expecting a film as goodas 28 days, but sequels?? never are, this is ok but feel as its been made to take advantage of the 28days veiwers to just rip on off.

stand lone film, ok entertaining,if very grusome special effects, specialy the helicoptor head decapitations, not one but 30 at a time,,,,,,,

the censors would ban this in a film, but because they are ''sci fi'' or 'hooror'' they seem to pass very violent shots,

has a few shocks here and there but left me disapointed at once again, sequelsteeling

What an utterly pointless film. A poor attempt to cash in on the superb 28 Days Later. Save yourself from a few wasted hours and avoid this film.

Rather limp, dull and boring! - 28 Weeks Later review by CS

Apart from attempting to blatantly cash in on the success of the far superior '28 Days later', it's hard to understand why this film was ever made in my mind! The original '28 Days Later' by Danny Boyle, was a masterpiece in how to create a classic horror movie on a tight budget, with the brilliant Cillian Murphy and a fab British All Star Cast, Boyle created a classic modern day masterpiece! However this new follow on is so cliched, annoying, pathetically limp and so badly directed that it just becomes a farce, more of a comedy than a horror! With the usually good Robert Carlyle stepping into the shoes formerly occupied by Cillian Murphy and Director Juan C Fresnadillo (who?) taking over from Boyle, this offers nothing new, the actors appear bored and a bit hammy, the script is dire and even the usually powerful Idris Elba & Jeremy Renner, cannot salvage anything of worth from this production! Set in London, I'm not quite sure why they felt the need to bring in the American Army, rather than the British Army, apart from attempting quite feebly to possibly appeal to an American audience? What usually sets Danny Boyle's movies apart and gives them strength, is that he tends not to pander to the USA market and their egos, but instead gives us gritty true to life or at least believable, dramas, with a sense of empathy. The plot in this film is predictable, cliched, rather annoying and all in quite irritating!

Whilst this is a sequel to 28 Days later (2002) it doesn't follow any of the characters from that film and has a plot focused on a complete set of new ones. Danny Boyle didn't return to direct this due to other commitments but he did direct some of the scenes including an early one of an attack on a barn. This is set, as the title suggests, twenty eight weeks after the 'rage' virus has swept through the United Kingdom. Believing the infected are now all dead Nato, under the American military commanded by General Stone (Idris Elba), have begun a clear up operation and begin repatriating people who were abroad at the time the infection started. These include brother & sister Andy (Mackintosh Muggleton) and Tammy (Imogen Poots) who are reunited with their father (Robert Carlyle) who managed to survive the outbreak. But when their mother (Catherine McCormack), believed dead, is found hiding in London the military are confused how she has managed to survive and believe she holds the key to finding a cure. Unfortunately army doctor Scarlet (Rose Byrne) is fearful the virus is not over and may return. And of course return it does. This is then a full on action horror thriller and very bloody it is too. But it's also really entertaining and a real rollercoaster ride. It lacks the originality of the first film and opts for some stunning set piece action sequences instead and some are very impressive especially the firebombing of London. There's a sub plot involving Carlyle and his two children that feels too contrived and doesn't fully fit the set up with the infected but overall this is worth seeing if you enjoyed the first one.

A Classic Example of A Superior Sequel. - 28 Weeks Later review by CP Customer

28 Weeks Later abandons the quaint, atmospheric nature of its predecessor and goes in the opposite direction; it's brash, unfocused, and wildly illogical. Months after the rage virus is contained and Britain begins reconstruction, an immune survivor/carrier pops up and jump-starts the whole cycle. Everything exists only to be cooler and more extreme than the original and very little works. Also, there are relatively few scenes of the infected and they're never particularly suspenseful (night vision scene aside). I mentally clocked out when an operating helicopter rotor was used as a weapon. Overall, it's technically impressive with some superb special effects....but it is pretty mindless fare.