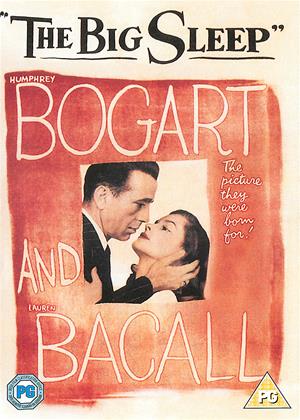 Reviews (4) of The Big Sleep

This production of Raymond Chandler's debut novel is the best adaptation of his work there is, and Humphrey Bogart the ultimate Philip Marlowe. He's paired with Lauren Bacall and release was held up for a year while Warner Brothers worked on their scenes together following their hit in To Have and Have Not (and marriage in real life). And their scenes are hot.

Marlowe is employed by a rich, elderly man to track down pornographic pictures of his young daughter for which he has been blackmailed. Which of course leads into a web of secrets and lies of the family's murky past which draws him down deep into the lowest strata of LA crime.

But, meh. It's not the knotty plot complications that attracted audiences to The Big Sleep. There is a riff of murders in the middle part of the film that are barely explained, if at all. The publicity sold Bogart and Bacall and they supplied sophisticated thrills to a hungry audience adrift in post war austerity. No one does this kind of fast repartee better than Bogart and he is an equal to Chandler's brilliant wisecracks. Bacall only ever worked when with Bogart, which is fine here because she isn't on the screen for a second without him.

Her elegance and languor is a plus but arguably she is upstaged by Martha Vickers as her nymphomaniac sister and Dorothy Malone as a sexy bookshop worker. Credit too for fine work by Elisha Cook jr. as a luckless gumshoe. Hawks was a master at filling his scenes with dazzling crosstalk. The music is by Warners' best composer Max Steiner, and the photography by their stalwart Sidney Hickox is most atmospheric. It's not by any means profound, but it is gloriously entertaining.

Private eye Philip Marlowe is called in to investigate the gambling debts of a rich man's daughters and uncovers - and of course resolves - a maze of gambling, blackmail and murder.

Humphrey Bogart stars with Lauren Bacall in this superb 1946 film noir. Bogart is superb in the role of private eye Marlowe - tough, wisecracking and a bit of a ladies man. The much younger Bacall is sexy and wisecracking in return and the two spark off each other in a memorable film directed by Howard Hawks.

This was Bogart and Bacall's second film together - they had married in 1945 (he was 45 and she was 20) and remained married until Bogart's untimely death in 1957.

The on-screen relationship between them is almost tangible and with the tight direction, complex plot, small time gangsters, dark and wet locations, gunfire and fisticuffs this is a superb example of Hollywood art.

A shambolic labyrinthine plot, cobbled together from three Chandler short stories. So? Just enjoy Bogart and Bacall whose chemistry scorches holes in the screen; direction as sharp as gunshots; one-liners to die for.

Try as I might, I can't quite bring myself to love this film. I like it - a lot. It is very entertaining, but something is holding me back from really falling for it. I rented this having just watched The Maltese Falcon which put me in the mood for more Bogart, but in my personal opinion The Big Sleep is not quite as good.

In trying to put my finger on why I have come up with the following.

Firstly, the plot of The Big Sleep (both novel and film) is famously convoluted. Numerous reviews go along the lines of: "don't worry about making sense of the plot, just enjoy the film noir atmosphere, the iconic performance and the wisecracks" etc. I'm fine with this up to a point, and indeed I did enjoy all of those elements, but I found that after about an hour I was so uninvested in what was going on that the combination of atmosphere, performances and sharp dialogue was struggling to keep me fully engaged.

Secondly, aside from Bogart, I found the supporting characters in The Big Sleep less memorable than in The Maltese Falcon. TMF's combination of Bogart, Sydney Greenstreet and Peter Lorre is pretty unbeatable in my opinion (both films benefit from the presence of Elisha Cook Jr.). In The Big Sleep, the only supporting player (aside from the aforementioned Elisha Cook Jr) that made much of an impression on me was Dorothy Malone, who pretty much steals the one scene she has in the film. Martha Vickers may have had more of a chance if her role had not been reduced due to concerns that she was overshadowing Bacall.

I know that this is bordering on sacrilege, but I am not totally sold on the 'crackling chemistry' between Bogart and Bacall. No doubt they were good together, but actually I think the relationship between Bogart and Mary Astor in TMF is more interesting and ambiguous than that of Bogart and Bacall in The Big Sleep. It may have been daring in its time, but the scene in which Bogart and Bacall discuss horse-racing, using it as a risqué euphemism for sex, was a bit laboured for my tastes. This was one of a number of scenes shot after the original filming had wrapped in order to capitalise on the public fascination with the Bogey/Bacall relationship and, whilst I realise of course that golden era Hollywood films were all about public fascination with its stars, I just wonder whether the obsession with B&B slightly knocked this film off balance. Alternatively, maybe I am just a contrary pain in the neck seeking problems where others find only pleasure.

Finally, I much preferred the pleasingly bitter ending to The Maltese Falcon than the more overtly romantic ending of The Big Sleep.

So there it is - I seem to have written a very negative review of a film that I actually enjoyed a lot. It's good, you'll enjoy it - but The Maltese Falcon is better.