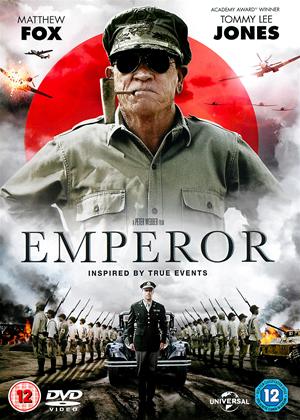 Emperor - If you are looking for a film with a sense of realism, give this one a go - Emperor review by CP Customer

Matthew Fox,Tommy Lee Jones, Eriko Hatsune and Toshiyuki Nishida all perform admirably in this film, portraying their characters with thought and professionalism. This film is not one for those looking for just another war type film because if anything it is anti-war in its portrayal of the ramifications of going to war both for the people of the nation doing so and for those taking a nation into it.

The film follows General Fellers around as he attempt to investigate the Japanese Emperor's role in the second world war, and find out what happened to his girlfriend who disappeared at the outbreak of war.

The film is rather listless - Tommy Lee Jones steals the movie playing General McArthur, and you almost get the feeling that the movie should have been about him - and been a better movie for it.

Instead we are stuck with Fellers, who broods over his typewriter revealing his thought processes and a rather lacklustre investigation where he goes round and visits various Japanese officials and has conversations with them, which prove to be about as dramatic as watching paint dry.

Yes, this is a movie based on historic events, and maybe that's the problem. It reveals details of the Japanese surrender and the role of the occupational forces, but it really doesn't engage the viewer much. Lots of pretty scenery and costumes - but with a lacklustre story that seems to almost be forgotten at times.

There seems to be a Japanese trend going around Hollywood with this years The Wolverine also deciphering Japanese heritage (albeit not very well) for the sake of a good story. Emperor however excels at using Japanese culture to form a taut political picture showing the folly of both Japan and America during the Second World War.

Following Japanese surrender, General Douglas MacArthur (Tommy Lee Jones) is sent to Japan to conduct an investigation into the Emperor of Japan with the ultimate decision of whether or not he be tried for war crimes resting right in his lap. However the film follows General Bonner Fellers (Matthew Fox), the investigations lead investigator, a conflicted man whose experience with Japan before the war proves essential to finding a solution.

While the film does feel ever so slightly biased, Emperor is a historically relevant thriller with a good sense of moral ambiguity, a slow burning detective story into the destruction of a country and the collateral damage all around. Vera Blasi and David Klass’ script brings colour to this dreary tale bringing beauty and devastation out in a single image.

Director Peter Webber tells a convincing love story inside a political thriller with ease, never mixing the two up while marrying them into a bigger story, the story of Japanese reawakening and journey to repair.

Fox is excellent as Fellers, A tortured man failing to get past something from his past and Jones is always good when he gets to play the grouch and MacArthur, a true politician in Army uniform can be vindictive when he needs to be. However the real scene stealer is Japan itself, a place of harmony in flashbacks and one of destruction and fear years later. It’s really a film about look and feel, a vision of Japan and Fellers at their best and their worst.