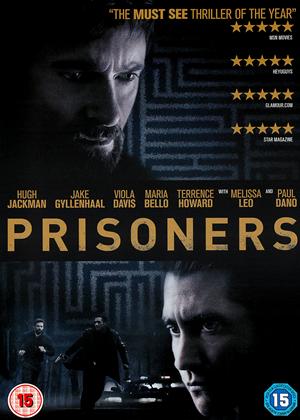 two thirds of an interesting thriller - Prisoners review by PC

It is a real shame that the makers decided to jump from an interesting drama regarding how you deal with a loss of a child to a seriously contrived conventional thriller by the end.

The acting is first rate, especially from Jake Gyllenhall who adds layers to the role of the cop investigating the disappearance. It is at the very least 30 minutes too long and just adds twist after twist until it loses all understanding of what was making the film interesting.

A shame really, but Gone Baby Gone is a much better film that tackles a similar subject.

Does the end justify the means? - Prisoners review by Steve

Lengthy but gripping kidnapping drama is quite bleak for a mainstream American film. Well acted, particularly by Paul Dano in a support role. Slow to get moving but imaginative and empathetic once in its stride, while not giving up all of its secrets. Note: such a realistic recreation of child abduction has the power to be quite upsetting.

Better editing could have cut the viewing time down as this movie is way to long for its content which towards the end loses the viewers interest as you end up feeling that you just want it to finish instead of wanting to see more.

Can't complain about the quality of the acting especially from the lead actors.

Other movie makers have covered this subject matter better, but give it a go and decide for yourself.

The first thing to say is that this movie is 2 hours 20 minutes long. 30 minutes could have been cut, but it suffers from the modern Hollywood disease of stretching movies past the 2 hour point. Silence of the Lambs was around 90 minutes. Look and learn.

Secondly, the plot is full of coincidences and contrived plot points - and some holes. I simply don't believe the persons responsible would not have been caught or at least investigated earlier. The plot also 'jumps the shark' (the snake...) a wee bit.

Having said this, I enjoyed the film - interesting and believable characters, esp Jake G and the Mr Dover character - maintained the interest. Some of the minor characters went in for drama school histrionics (USA drama schools must teach this as I have seen examples of such hissy fits in many modern movies - but it really isn't believable).

The thriller maintains the interest and has some interesting - if contrived - twists and turns. Guessed the true situation early on, however, as I knew this is where a script writer would go.

A good attempt to "up" the genre norms. - Prisoners review by DW

I like a nice long film providing it holds my attention; this one did. If you like to be entertained & the "price" of your ticket is to suspend your belief in realism, so what?

This is not just an "off the studio shelf" US cop/thriller film in that some themes of human nature are looked at untypically closely. Sit back & enjoy would be my best advice.

Requested this because a critic described it as 'unjustly neglected'.  Over-long, over-complicated, inconsistent, totally improbable, waste of acting talent and a mockery of the true every-day awfulness of child abduction.  Save your money.  Rent something else.

totally gripped. We're not avid film watchers to be honest but I'd say this is the best film I've seen in years. Totally and utterly brilliant :-)

Interesting idea, how the victim becomes the aggressor. Some good characterisations well acted. Perhaps a tad too long?

Watch it! - Prisoners review by UF

A dramatic and emotionally draining thriller, that held my attention for the full 2 hours 20 minutes. The ensemble cast is first rate, however it's Hugh Jackman who impressed the most with a very raw and emotional portrayal of a man wanting to protect his family.

I definitely recommend this one.

There are many movies out there that think they are smarter than they actually are. Lucky Number Slevin for instance treats its audience like idiots until the predictable end. However at least Slevin is a fun romp, Prisoners treats its audience like they are morons and forces them to sit through an overly long, needlessly dark story of family and forced religious symbolism.

The film follows the story of Keller Dover (Hugh Jackman), a father whose daughter goes missing along with another child in the neighbourhood. When police detective Loki (Jake Gyllenhaal) cannot track down the kidnapper, Keller takes matters into his own hands and handles his own investigation, including discovering what a mentally handicapped man (Paul Dano) who was hanging around his house knows, by any means possible.

Filled with a plethora of highly respected and talented actors, Prisoners concentrates heavily on the psychological impact this kidnapping has had on them from Keller’s devolution into something vindictive and violent to Terrence Howard’s Franklin forgetting his moral life and his relationship with god for the sake of his child. Melissa Leo and Viola Davis also pop up for memorable cameos but the weight of the films story revolves around the corruption of Keller.

Jackman is fantastic as the unhinged father and Gyllenhaal makes a very physical and imposing detective. The real problem with Prisoners isn’t its actors, it’s the films story, a mess of predictable Law & Order tropes disguised as smart writing. As the film progresses the end becomes increasingly obvious as the films tense and atmospheric buildup gives way to cookie cutter dialogue and actions. The films police presence make the cops in Super Troopers look smart, something I never thought possible.

In fact the film's story really ends about 40 minutes into this almost 3 hour picture as the real killer emerges through a collection of badly sequenced clues. The films editing also proceeds to ruin what could have been a tense crime drama as it concentrates too heavily on the character beats. While you may be impressed by Jackman and the other strong character performances there is nothing here worth mentioning in terms of story.