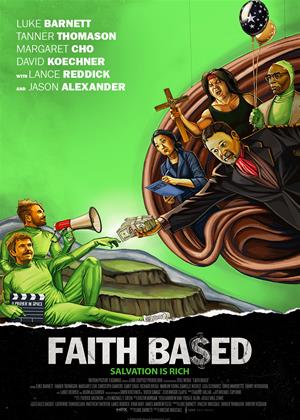 Sign up
Margaret Cho: I'm the One That I Want

Not released
Key and Peele

Not released
This Close: Series 1

Reviews of Faith Based

It was bound to happen at some point. The abundance of Christploitation pictures was sure to receive some sort of satire at some point. How could anyone not try to conceive such a film after the absurdly ridiculous yet popular Christian dramas of God’s Not Dead and Fireproof? The PureFlix flock is long overdue for some satirization. Faith Based starts with this premise and sadly abandons it for recognizing Christianity more as a gold mine than a propaganda factory.

Luke and Tanner are best friends who still haven’t found their calling. They love movies though. Maybe they can make a movie. But what movie will make them a lot of money to clear their debts. The topic comes up of Christian movies and how much money they make. The friends, though inept for their get-rich-quick-schemes, are smart enough to see how much these films can rank in and how easily Christians will rally around them. All they recognize with this subgenre, however, is the cash. The two of them look up movies like God’s Not Dead and Fireproof more for their box office as opposed to what is within the film that makes them garner such a crowd. All they know is that a Christian movie can make bank, no matter the genre it occupies.

In this instance, Luke and Tanner decide on developing a sci-fi picture that takes place on Mars. While such a concept is too silly to be a believable piece of top-tier Christploitation fit for PureFlix, it is interesting enough to warrant a tale about getting inspired to make a movie. After all, there’s something incredibly adorable and inspiring about a pair of friends who want to make something as absurd as a movie on Mars where prayer will save the day. They barely know anything about green screens but that won’t stop them from dressing up in green and jumping into their prayer-based science fiction film.

As you may expect, the picture becomes less about learning about the Christploitation model and more about bonding while making a movie. The Christian company who will buy their film is briefly portrayed as being hypocritical but they accept a deal for a cheap picture as though they were Netflix. There’s something rather interesting about how the Christian angle is treated in the film as a means to an end in the same way such a concept is treated as an excuse to make a movie about making movies. It’s a weirdly meta tale that I wish I could love more on that angle.

There’s other funny stuff happening in the film and it’s mostly because there’s a stellar supporting cast at play. Jason Alexander briefly pops in from time to time as an infomercial scam artist that is an absolute delight. He almost plays a continuation of his huckster character on Bob Patterson. David Koechner is also a treat as a Rambo knock-off who constantly shouts in his pun-infused action films and his cereal-touting commercials. And, wow, does the film instantly become more enjoyable when Lance Reddick drops into the picture as a pastor who agrees to help with the film. How can you not love Reddick, especially in a film where he says a line like “I’m the blond bitch now” and make it sound so incredibly chilling.

Faith Based is mildly surprising in how it doesn’t deliver on its parody of Christploitation but does have enough heart and silliness to be mildly charming. The performances have their moments of great joy and there’s an admiration for somewhat simple stories about two friends trying to recapture their youth and save their community. It’s a decent picture that just narrowly manages to ascend past the gimmick.