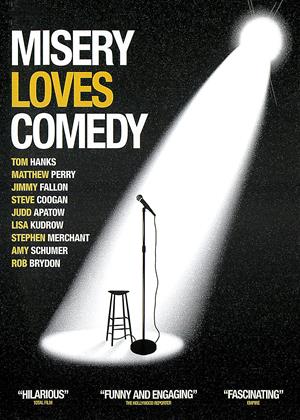 Robin Williams once said that the saddest people in the world must be those who make others happy because they so desperately want others to not feel what they themselves felt. Those sad words seem to ring true for comedians everywhere who find themselves broken between the stage. It’s an aspect you rarely see from comedians because their presence as entertainers make us smile. Such a subject seems entertaining and important enough to warrant focus - especially in the wake of Robin Williams’ suicide. I’m just wondering where that documentary exists because it doesn’t feel present with Misery Loves Comedy.

It’s an admirable effort gathering together so many big names to talk about such a topic. Every comedian seems to have shown up from the modern talents (Amy Schumer, Jimmy Fallon) to the veterans of comedy (Tom Hanks, Larry David). All of them give their own perspectives of growing up and making their way up to the microphone or penning their first big jokes. They all have a story to tell from the most tragic of childhoods to the hardest of part-time jobs. One comedian slaved away at tables in a comedy club for three years before getting his big shot on stage. Another finds the perfect outlet for their saddest of memories.

The problem with this documentary is that nobody really appears all that miserable inside. When the camera is on, so are they. Comedians just can’t help it. They’ve probably been through interview after interview where they always put up that wall of entertainment to hide their true selves - even when the subject happens to be them specifically. We never get a chance to see these comedians as anything more than talking heads where they don’t exactly bare all of their soul. There’s no extra footage of the comedians getting up out of their chairs or even dramatized sequences for the stories being told. No clever editing of themes. No wildly revealing answers. The movie itself is an endless stream of talking head after talking head.

To its credit, director Kevin Pollak does assemble quite an assortment of comedic talkers. Comedy director Judd Apatow relays some interesting conversations he had with Jim Henson on the warmth of his soul. Larry David regales the audience with his adventures in New York to eventually helming the greatest sitcom of all-time. Kevin Smith adds his usual two cents for knowing the business and Penn Jillette brings his insightful philosophies of being an entertainer. Marc Maron and Jimmy Fallon both bring up their childhoods with how they learned the intricate art of telling a joke. And the list of the interviewed stretches on and on with comedians young and old, stand-up and writers, directors and actors.

The whole experience becomes draining after a while - taking in far too many views and stories that are boiled down to 94 minutes. Pollack’s interviews end with the titular question of if misery truly does love comedy. By the time they arrive at the final question, the comedians don’t seem that into the honest nature to deliver an engaging response. It seems as though they have spoken for so long that they can’t quite muster a grand cap of a final thought. Did any of them want to talk about Robin Williams or was it still too soon during filming?

The ultimate answer is that misery does love comedy, but there isn’t much of it present in this documentary. Sure, the comedians address the subject, but hardly dig deep into what is a fascinating subject on entertainers. The movie ends with a dedication to Robin Williams after his suicide - making me all the more hungry for a real documentary on this topic rather than just a hangout session with some celebrities.