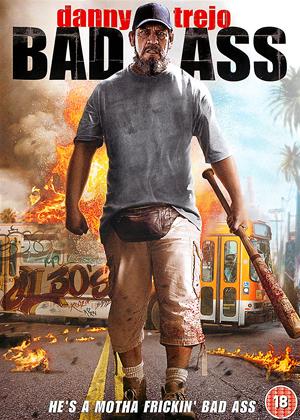 Not much to this film at all, total waste of time in my opinion. I would not bother about thinking of viewing it, the action is so false and the plot is even worse.

One time action hero, Danny Trejo, plays Vietnam veteran Frank Vega, in this years fist fuelled tale of an aging hero battling the thuggish local punks. In director Craig Moss’ equivalent of Clint Eastwood’s Grand Torino Vega finds himself a local hero, labelled “Bad Ass” by the media after stepping in when a pair of bullying youths confront an older man on a city bus.

“Bad Ass” shoots to fame and suddenly the – ahem – attractive face of Trejo appears on a series of t-shirts and coffee cups proclaiming him the saviour of the older generation.

Three years later Vega is grieving over the loss of his mother and drowning his sorrows with his best friend Klondike (Harrison Page); Vega’s life seems to be on the road to ruin, until the sudden murder of Klondike brings Vega’s Bad Ass persona back to bring his friend’s killers to justice.

Bad Ass offers the basics of any action movie and those looking for plenty of mindless violence and adrenaline filled action, there is little else on offer here however; the fumbled attempt to introduce drama and romance into the story is nothing short of comical and likely to make many members of the audience vastly uncomfortable.

Also starring Hell Boy’s himself, Ron Perlman, Bad Ass is not the worst story of its kind, the acting is adequate and the direction passable; the script and story, complete with farcical love story between Vega and a shockingly beautiful younger woman, swallows any and all potential the film may have had to be vaguely interesting.