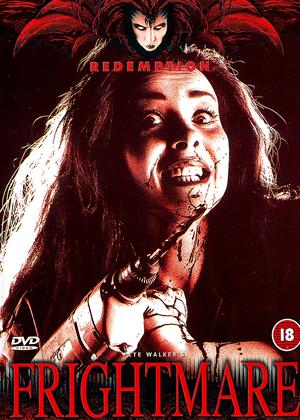 “It’s such fun being night people, isn’t it?” Sheila Keith, one of Director Pete Walker’s repertory stalwarts, asks at one point. Here, she plays Dorothy Yates, recently released from an asylum after displaying violent cannibalistic preferences, now completely cured. A quick look at the gleam in her eye and it is clear such a prognosis was … optimistic, to say the least.

Sheila Keith has been underrated, despite her numerous appearances in Walker’s films, and she is never better than here (at least not in the films I have seen her in thus far), and she is given material she can really, if you will, sink her teeth into. Her long-suffering brother, also committed, is played by Rupert Davies in one of his last films. Edmund Yates is guilty only of covering up his sister’s actions. Her brand of insanity attracts a certain loyalty. Imagine if she had other relatives?

Of course, she does. The wayward Debbie, whose dewy-eyed innocent look belies her murderous nature, and Jackie, who secretly visits Edmund and Dorothy late night.

This is my favourite of the films directed by Pete Walker so far (I’m not watching them chronologically). It has a central theme that doesn’t meander, features well-written parts for all cast members, and every part is very well played. It has the crisp starkness of a low-budget UK thriller and is directed very much in the style of television series at that time. It’s really a showcase for Keith’s magnificent, towering performance. Yet she’s supported by a fine cast (including cameos from Andrew Sachs, Leo Genn and Gerald Flood), and the proceedings are given a pleasingly open-ended climax.