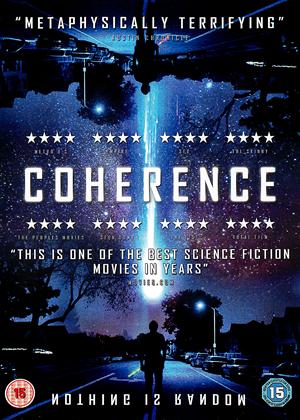 I honestly don't know why everybody except me seems to love this film so much. 8 people meet for dinner, and every one of them instantly comes across as smug, shallow, self-absorbed and irritating. Which is a pity, because this is the entire cast of the movie, and every scene will feature some or all of them, frequently bickering like spoilt children.

It has been suggested that this is an intelligent sci-fi drama that makes you think about the true nature of quantum physics. It isn't. The basic premise is that a passing comet causes utterly implausible Twilight Zone things to happen because nobody involved in making this movie understood quantum physics at all, therefore it could be used to justify absolutely anything. The "science" in this film is so scrambled that they could equally plausibly have said that everything happens because the house was built on a dimensional portal constructed by an extinct race of magic elves. You might as well claim that "Guardians Of The Galaxy" is a good introduction to astrophysics!

Anyway, a bunch of stupid, unpleasant people get into an incredibly strange predicament, the nature of which slowly becomes apparent. But even once they know what's happening, they treat the whole thing as a problem to be solved in the most selfish ways they can think of, when they're not squabbling about previous relationships going back over a decade, even as some of them unsuccessfully try to point out that this is not a good time to be raking over old love affairs. Alas, the characters have no choice but to act like morons because if they don't, the cleverly ironic punch-line the scriptwriters thought up won't work.

These are the kind of "friends" who don't really like each other, or even themselves - a great deal of the plot depends on this fact - so why should we care what happens to any of them? One character, the nastiest and most annoying of the lot, says straight out that he's such a vile person that when he's had a few drinks he's capable of murder. He then starts swigging wine for no particular reason. This pretty much sums up what's wrong with the movie.

I suspect this film wouldn't exist if its makers hadn't seen an obscure 2007 sci-fi thriller called "Timecrimes". Though flawed, it deals with very similar subject-matter in a much more interesting, intelligent and genuinely nightmarish fashion. The reason not many people saw it is that it's in Spanish. Pity; it's a far better movie than this one.

A group of friends get together on the night a comet comes close to earth. It's gravitational pull results in a fight for survival against alternative versions of themselves. If you like to ponder on the nature of quantum mechanics then this film is for you. However, if you like special effects laden sci fi, look elsewhere.

What an amazing concept, if you think outside the box and enjoy exploring new ideas then this film might just tick all your boxes.

Can't really discuss the film as the slow realisation of what you are witnessing is as important as the concept being explored.

Wish I could give it a zero! - Coherence review by DW

I have never felt so moved as to write a review before, however here it is. This film is utter crap! - I never walk out of cinemas early or turn off a dvd before the end. I wish I had for this one!

Read Count Otto's review. It is the most perfect analysis, I couldn't agree more or improve on it.

I agree with the other negative reviews this is a bit annoying to watch with people who are supossed to be friends at a dinner party when strange things start to happen. I have sadly seen worse than this I managed some how to make it to the end of this one , would never watch again.

I couldn't find any subtitles on this DVD. Maybe you have to understand quantum mechanics to find them. My potential enjoyment was thus impaired but, judging by the bickering going on at the start, I maybe didn't miss much when I had to switch off.

Interesting ,though pretty Low Budget Time Loop problem, If you have seen the movie ' Triangle ' you will know what to expect here. Takes a while to get going ,and ages before you get any kind of reveal. a Dinner Party of really rather annoying people ,apparently friends who have all dated one another in the past, get stressed out as a rare Comet passes Earth ,and all hell breaks loose by the ending.

Worth seeing though dont all rush at once ,its OK,That's all, its not Great but it is Worth seeing ....eventually .

Coherence is a science fiction not of visuals, but ideas. The theory of quantum mechanics and parallel worlds is turned into a creepy party game for a gathering in a California suburban home. Shot on a shoestring budget, there are no lavish special effects and it was shot in the simple shaky camera format. It could’ve easily fallen into a forgettable bin of ambitious indie productions. But thanks to some grounded characters and a laser-focused story, Coherence winds up being one of the most intelligent sci-fi pictures of the decade.

In an upper-middle class home, a group of friends gather for a night of wine, cheese and gabbing. Their gathering happens to coincide with the passing of a comet which causes all their smart-phone screens to crack and the internet to go out. In their many conversations of careers and remedies, the subject of the comet comes up in which one person makes reference to a comet passing that caused an entire town to be confused. Those who were going somewhere found themselves lost and a wife claims to have murdered her husband who is still alive. Foreboding to be sure, but what transpires next is creepy tapestry of a Twilight Zone concept.

The power goes out in the neighborhood and a few venture out to find out what’s going on. They return shaken and with a box. Inside the box are photos of everybody in the house along with numbers written on each one. The twist is that the photos seem to have been taken recently in their house. When were these taken and what do the numbers mean? For more answers, a larger group takes some blue glow sticks and take a trip out into the dark night. While crossing the street, they witness a frightening sight: themselves with red glow sticks. The two parties, frightened of each other, quickly retreat back to their houses. Fearful and desperate for answers, they start receiving notes from their other selves and start forming their theories of just what is going on. These include the ideas of a parallel universe and the Schrodinger’s cat experiment.

Though there is a large ensemble cast at play, the one character we’re given to latch onto in this dense plot is Em (Emily Foxler). She arrives at the party with her new boyfriend as well as her ex. We mostly get to follow this entire mystery from her perspective amid all the speculation and paranoia conveyed by the others. Em starts identifying such perplexing clues and strange changes as when the numbers seem to change, phones are no longer broken and all the information that has been gathered already is flipped upside down. That’s not to say that the rest of the cast isn’t interesting as the group includes a new-age pagan cleric, a former star of the TV show Roswell and bearded baldy who seems to have inside information on this whole ordeal.

The brilliance of Coherence is in its simplicity. There are no big name actors, no scene stealing dialogue and no characters that chew up what little set there is. What kept me glued to the screen were the ideas being posed and the slow discovery of each clue. Director James Ward Byrkit keeps the plot moving and the characters talking fast enough that few moments feel like dull or wasted opportunities. Byrkit’s story rarely gives a moment of breath to delve deeper into the psyche of the characters or a true explanation for the events as they transpire. It’s a bit of a tradeoff, but one well worth the exchange for a more engaging puzzle pictures.

I’m doing my best not to reveal too much about this story because it unfolds beautifully as an unconventional sci-fi mystery. It plays with our perceptions in what we know, who to trust and just what may be manipulating all that is going on. The vagueness plays to the strengths of the picture where you just can’t wait to see what transpires next. It’s no sci-fi classic, but it manages to create something wonderful out of next to nothing.