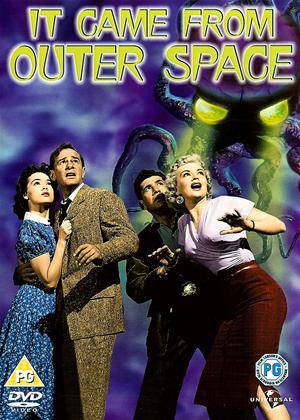 Rent other films like It Came from Outer Space

Reviews (1) of It Came from Outer Space

Invasion of the Tree Impersonators! - It Came from Outer Space review by Count Otto Black

This is one those old sci-fi movies which, while you can see why it's regarded as a minor classic, hasn't aged that well. Its most striking feature is the concept, then almost unheard of in B-movies, that space aliens who look monstrous by our standards of beauty aren't necessarily evil. Since 1953, we've seen plenty of films in which freaky-looking extraterrestrials aren't the bad guys, so the main plot, which revolves around the highly intelligent and enlightened hero being prepared to accept that these strange and terrifying entities mean us no harm but not being absolutely sure it's true, isn't anywhere near as original now as it was over 60 years ago.

The biggest problem with this movie is that, since it's trying to be a thriller where instead of not knowing who the murderer is, we don't know whether the space monsters are good or bad, the aliens can't do anything which unambiguously shows them to be evil, meaning that the kind of army-versus-space-robots ray-gun action you expect in this type of film is in very short supply, though there is a little bit towards the end. Bearing in mind the special effects available at the time, it was a sensible decision to give the aliens in their true form as little screen-time as possible and never allow the viewer to look at them for very long, but actually the rubber suits are quite effective (the artist who designed the DVD cover above obviously didn't bother to watch the film, since the aliens look nothing like that, and have only one eye). And the "Invasion of the Body Snatchers" notion of aliens replacing humans with lookalikes is well handled, giving the supporting cast a chance to play dual rôles as ordinary decent folks and creepily emotionless space invaders.

Richard Carlson, not exactly a household name, isn't the most exciting of heroes, though Barbara Rush as his girlfriend makes more of an impression, mainly because she gets to play an alien too and go all weird. And that blonde on the DVD cover is in the film for about 30 seconds (like I said, the artist didn't bother to watch it). Some of the dialogue is horribly clunky, such as the moment when one character explains at length that the thermometer currently registers the exact temperature at which humans are most likely to become irrationally violent, then immediately becomes irrationally violent. But on the whole, it's a pretty good though somewhat actionless psychological sci-fi movie which would have made a superb episode of "The Twilight Zone" or "The Outer Limits", but feels a little stretched as a feature film. Though on the plus side, the fact that it was originally shown in 3D isn't obtrusive, apart from some shots of falling rocks that go on for a bit too long. So, perhaps it is a classic, but it's certainly a minor and dated one. And I'm afraid it's nowhere near as much fun as the quite similar "I Married a Monster From Outer Space".