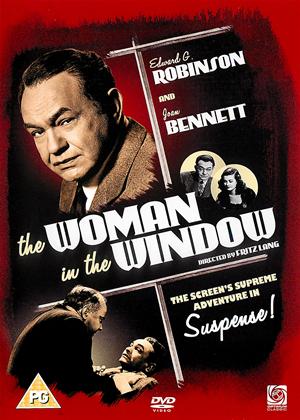 Rent other films like The Woman in the Window

Reviews (1) of The Woman in the Window

Includes spoiler. - The Woman in the Window review by Steve Mason

Lang never became the director of prestige that Hitchcock was in Hollywood and only ever attracted low to medium budgets. But film noir never much thrived on big budgets. It was more important to get a great script and some tough lead actors, and then they could just hide the set in the shadows. The Woman in the Window is a playful melodrama, more in the style of an old school detective story rather than the mean streets of hardboiled crime writing.

Edward G. Robinson is a comfortable, middle aged/class Professor of Psychology whose wife goes away on a trip leaving him exposed to the influence of a young, beautiful artist's model (Joan Bennett)  who murders her possessive sugar daddy, leading to blackmail by Dan Duryea's swaggering heavy. It's a cute story because Robinson who disposes of the body is friends with the DA who relays back to the Professor the progress of the investigation, including evidence against a man who closely resembles the guilty academic. Though it would be preposterous for this rather predictable man to be suspected.

In the mid to late forties, Joan Bennett became typecast as the femme fatale, the sexy, desirous agent of entrapment, and mainly in the films of Fritz Lang. Very still, languid, the voice low and seductive (in contrast to the fast talking dames of the thirties). She wouldn't be released until the fifties when she moved onto being the suburban housewife in the Father of the Bride series. For me she is one of the great ladies of noir.

The film includes the discreet Freudian symbolism that was always there with Lang but is particularly appropriate here because the narrative is a dream. The performances are great. Duryea is the kind of dangerous, greedy lout that turns up so frequently in film noir, threatening any chance of the hero steering back onto the main road. It has the gloomy, fretful atmosphere of noir, and while it is isn't Lang's very best work, it is extremely entertaining and was a big enough hit for the three main stars and the director to assemble again the following year for Scarlet Street.