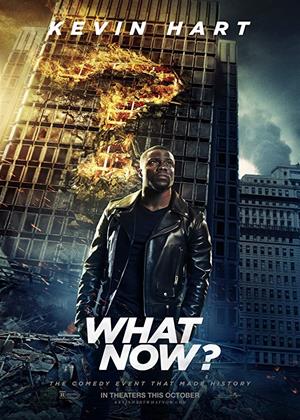 Not released
Kevin Hart: Live Comedy from the Laff House

Not released
35 and Ticking

Reviews of Kevin Hart: What Now?

“We sold out a football stadium!” Kevin Hart shouts these words enthusiastically as he takes the stage at Lincoln Financial Field where a packed stadium cheers for him. To the uninitiated viewing such an introduction, one might believe that Kevin Hart is a stand-up genius if he can gather such a massive crowd for a comedian. Imagine their fading smile once his comedy starts and it’s nothing all that biting, clever or memorable.

It’s that Kevin Hart isn’t funny. I watched him recently play the perfect opposite for Dwayne Johnson in Central Intelligence. He seems to come off as a nice guy as well. But what does he really have for stand-up material? Observations of “black women be like mmm-hmm” and being scared of his kid’s Batman decorations? He used similarly weak bits at his Madison Square Garden show and if this trend continues, chances are we’ll probably see him pull these same jokes at a stadium twice this size. That is, if his stand-up comedy sustains popularity long enough.

Before his comedy show starts, he begins with an elongated ego boost of an opening where he plays a spy working alongside Halle Berry. He attends a poker game with Don Cheadle where he attempts to find humor in everything from subtitles to Cheadle not being cast as Iron Man. One action scene later, he attempts to steal a kiss from Halle Berry and transitions into his comedy setup. It’s clear that this sequence was present to extend the length of his hour-long comedy show to feature length given how Hart stammers for comedy in this setup. Most pre-show skits for comedy specials tend to be short and sweet, whereas Hart’s is long and lukewarm. If Hart’s comedy is truly as epic as the size of his crowd would suggest, couldn’t we have at least seen a more expensive or creative presentation for Hart trying to goof on the spy genre? Also, I don’t know if Hart is aware, but the spy spoofing days are long over.

Call me a white guy who just doesn’t get it, but Hart’s comedy didn’t do much for me. He has some decent setups with bits about how women will carry on one-way text conversations and what his friends do when they’re drunk, but Hart retreats to too many easy outs for his comedy. If he ever becomes stuck for a laugh, he can always repeat a previous punch line (presumably hoping it will be a catchphrase) or laugh at his own bit. The crowd will eat this up and I’m curious what they’ve been drinking so I can share a laugh as well.

But are they laughing? Most peculiar about this special are the few times the camera will cut to close-ups on the audience. Watch how many appear to either be forcing a laugh or mildly chuckling when the camera is on them. Perhaps the laughs seem bigger in the stadium if a massive amount of people only timidly laugh will sound collectively as though an entire theater is erupting in uproarious laughter.

One bit that falls particularly flat is when Hart smilingly tells the tale of how we was spared from being robbed at a gas station line because he was black. He cackles about fleeing out the door while others look at him asking for help. Seems a little dark for Kevin to be joking about people being mugged and doing nothing about it; “I can’t call for help - my phone is dead, which is what you’re going to be soon.” This is comedy? I guess I’d have to be there getting a gun pointed in my face to see the humor in leaving others to die.

Hart states that the reasoning behind the title for his special of What Now is attributed to people asking what is going on in his life. He begins that there’s always something new happening in his life from marriage to being a father to hanging with his friends. Nothing huge, just normal stuff that every normal man experiences and that’s great, Kevin. I’m not sure why you needed to sell out a stadium to tell us all this as it’s not THAT funny.