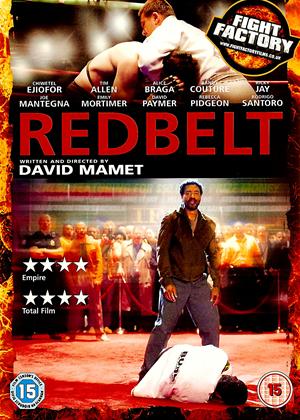 This is one of Mamet's most accessible films to date, and it initially seems a surprising choice to set it in the world of MMA, but perfectly suited to his trademark themes of power, corruption and the fight of the little man against the great and corrupt. Mamet's stylised dialogue is there too, repetitive and emphasised sentences, punchy and powerful- as with all Mamet productions the words speak louder than the action, although there are enough well choreographed fight scenes and plot twists to keep us entertained. Chiwetal Ejiofor provides a solid, calm centre to the whirlwind of accidents, deceptions and tragedy around him, and effectively portrays a proud, principled Ronin figure. Excellent support from Emily Watson too, and it's a pleasure to see the leads dealing well with Mamet's unusual verbal constructions. A couple of things let the film down, however- the somewhat confused and confusing ending feels as if much that would make sense of it was left on the cutting room floor. Also, some of the portrayals of the corrupt characters are a little cliched (sharp suited, slick haired latinos for example). That said, overall it is a satisfying film, with great performances. One for Mamet fans and anyone who enjoys and intelligent drama.

Not much good fighting, unbelieveable characters, slow questionable plot, and rubbish ending which was completely unrealistic. Chiwetel Ejiofor was the only good thing in this film.

Poor movie with poor acting, we couldn't even finish the movie as we didn't like it at all. we certainly would not recommened this rental.