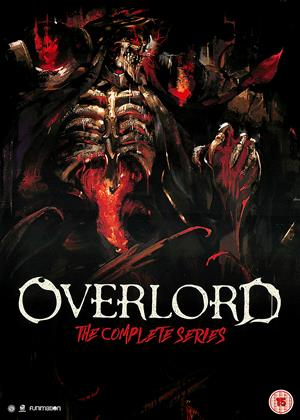 Synopsis:
From Madhouse Inc., the studio behind Death Parade, Parasyte, and No Game No Life, comes the ultimate 'trapped in a game' anime. On the night his favorite MMORPG is scheduled to be shut down, veteran player Momonga stays logged in until the clock hits zero. The screen goes dark for only a few moments before he finds himself completely immersed in the online world of Yggdrasil. Left with all of his character's devastating powers, total dominion over his loyal NPC's, and nothing better to doMomonga decides to try his hand at taking over the world.
All the hours he's spent grinding and dungeon crawling have certainly paid off, and as he tests his strength on local rogues and legendary beasts he comes to realize that not one opponent can stand against his might. Embracing his new identity as the fearsome mage Ains Ooal Gown, Momonga continues his search for bigger, badder adversaries. Leaving the people of Yggdrasil to wonder - who exactly is trapped with whom?
Directors:
Masaki Matsumura, Kunio Wakabayashi, Ryôichi Kuraya, Mihiro Yamaguchi, Shuji Miyazaki, Dai Seki, Naoyuki Ito
Producers:
Kentarô Hashimoto
Voiced By:
Satoshi Hino, Chris Guerrero, Yumi Hara, Elizabeth Maxwell, Bryan Massey, Manami Numakura, Shinya Hamazoe, Sumire Uesaka, Emiri Katou, Masayuki Katô, Shun'ichi Maki, Yumi Uchiyama, Kenta Miyake, Shigeru Chiba, Ayumu Murase, Aoi Yuki, Toru Sakurai, Mikaela Krantz, Kazuyuki Okitsu, Natsuki Hanae
Writers:
Kugane Maruyama, Yukie Sugawara
Aka:
Overlord II
Studio:
Funimation
Genres:
Anime & Animation
Countries:
Japan

Sign up
Ghost in the Shell: Stand Alone Complex

Although I’m entering this review in a semi-biased way, I must say that Overlord is one of the best anime in today’s existence, and then some. Biased because I have a natural aversion against Japanese 3D animation, which can either make or break a whole show and even put a bad taste in my mouth (looking at you modern Berserk). Thankfully, Overlord is worked on by some of the industry’s most revered studios (Parasyte, Death Parade), and to this extent, the animation is done flawlessly and in tone with the rest of the show (i.e. story, narrative arcs, character traits, etc.) With all of that being said, Overlord is not yet Bebop or Saitama-ready, but it certainly aims to conquer that anime league as well. Onward.

Being a huge RPG fan (Tyranny, Planescape: Torment, Pillars of Eternity, Arcanum), the references to strength, energy, and other skills completes the second bias I have about this show. They make Overlord that much more enjoyable, and believe it or not, more believable too. Take note however that some of the references went over my head, mostly because I was concentrating on tackling Western-based RPGs and CRPGs, rather than indulging in their Japanese counterparts. Nonetheless, the majority of these references was well-placed and took a significant part in playing a significant part in the overall narrative structure of Overlord.

The show follows Momonga in the form of his online avatar Yggdrasil, who ends up trapped in this RPG world after the game suddenly shuts down. But, Momonga’s recent fate becomes both a blessing and a curse; curse because, you know, he’s trapped inside a god-darn game. But this also comes as a blessing for him because his character was basically enjoying god-like powers in the game, so he’s pretty much invincible all throughout. He is also in possession of several powerful guards to protect his character, but since he doesn’t need them anyways, he decides to venture on his own by transforming his character into a low-level adventurer looking to score big. And this is where all the fun begins, as Momonga (now Ains Ooal Gown) can beat seemingly more powerful enemies than himself, and this makes for a good and engaging series.

The only downside of Overlord is that it’s too short (you can buy the light novels/manga to continue the story, but if you were hooked on the show, what’s the point of doing that anyways). Some of the characters were clearly just cardboard cutouts, whilst others were developed way more than what the story needed to progress forward.

All in all, good show for those who aren’t squeamish and aren’t the first ones to look away when the main character is getting a flu shot. Apart from that, Overlord is quite enjoyable and fans of RPGs should definitely check it out. Like now.