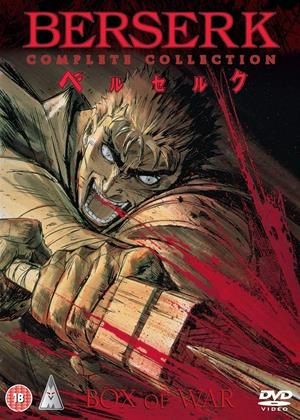 Berserk doesn’t feature a top-notch animation (for its time), often includes a subpar voice acting, and its technicalities are passable most of the time. Then why is it so darn freakin’ good? Well, it has something to do with the story, and the way it’s presented, capturing you all the way from the beginning and never letting you go until the very end (and boy does the end deliver). Amidst all its flaws, Berserk is still one of the best animated Japanese series to date, or as the kids like to call it: one of the best animes ever made.

Summarised, Berserk is a 10-hour mini-series depicting the grimmest moments of the life of a swordsman wanderer named Guts. This guy (Guts) is one of the finest, most intriguing and complex characters ever put on paper and onto screen later. Guts wields a massive sword, but his strength does not stem from magic or other trickery; instead, he is innately driven by survival and self-improvement in everything he does (especially true when he battles demons, shapeshifters, and other supernatural phenomenon). So, Guts is a loner who knows his way around stuff, a deadly handyman of sorts, but his rogue likeness is challenged when he stumbles upon the charming and mysterious Griffith. This Griffith guy (drawn as if he was a woman) is a ruthless leader that utilises unconventional means to see his ways being done. Yet, his deadly charm is what draws Guts toward him, and this both mental and physical bout between Guts and Griffith would mark the central conflict in the series no doubt.

Berserk: Vol.1-6 features some of the best character development in a series, ever. As the plot thickens, you’re quickly finding yourself overlooking the bad (animation, redundan score) in favour of the great depth of characters, their interactions, and the awesome backdrop of demons and witches upon which everything else rests. Honestly, the setting in Berserk feels as realistic as a sword-and-sandal fantasy slasher series can be, heightened only by the constant twists and turns that leave you glued to the screen for the whole duration of this marvelous gem.

As said, the music is redundant but necessary, and as much as the previous statement sounds as an oxymoron, Berserk is everything but. Come to think of it, Berserk is one of the most consistent fantasy series to date, which is no small feat considering the majority of other animes and their infamous downward spiral towards obscurity (winking at you Terror in Resonance and Death Note!).

Finally, if you haven’t watched Berserk or any of its numerous iterations until now: go ahead and start from the beginning, the one that made it all possible. Important side note: avoid the newest so-called Berserk (2016) in-animation at all costs.