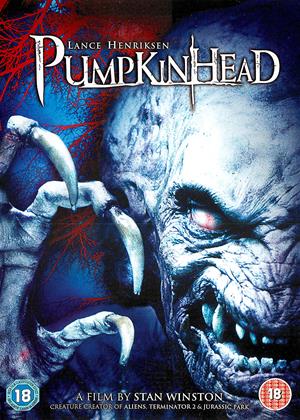 Synopsis:
When a group of tenacious teenagers inadvertently kill his only son, Ed Harley (Lance Henriksen) seeks the magic of a backwoods witch to bring the child back. But when she tells him the child's death is irrevocable, his grief develops into an all-consuming desire... for revenge! Defying superstition, he and the witch invoke 'The Pumpkinhead' a monstrously clawed and fanged demon which, once reborn, answers only to Ed's bloodlust. But as the invincible creature wreaks its slow, unspeakable tortures on the teens, Ed confronts a horrifying secret about his connection to the beast and realizes that he must find a way to stop its deadly mission before he becomes one with it forever!
Actors:
Lance Henriksen, Jeff East, John D'Aquino, Kimberly Ross, Joel Hoffman, Cynthia Bain, Kerry Remsen, Florence Schauffler, Brian Bremer, George 'Buck' Flower, Matthew Hurley, Lee de Broux, Peggy Walton-Walker, Chance Michael Corbitt, Dick Warlock, Devon Odessa, Joseph Piro, Mayim Bialik, Jandi Swanson, Robert Fredrickson
Directors:
Stan Winston
Producers:
Bill Blake, Howard Smith, Richard Weinman
Writers:
Ed Justin, Mark Patrick Carducci
Studio:
Lionsgate Films
Genres:
Horror

This is a surprisingly effective film featuring an effortless star turn from the terrific Lance Henrikson.

In the first sequence, a young Ed Harley witnesses the murder of a neighbour by the legendry Pumpkinhead. Many years later, he’s a grown man (Henrikson) with a child Billy (appealing Matthew Hurley). All good so far, but then the Eighties Kids arrive and prematurely, my heart sinks. That’s not how they’re addressed in the film, it’s just my name for the scourge of many a horror fiction, the ‘group of teens’, often played as brattish nasties who are always stoned, drunk and/or horny – and very dislikeable. So it is a relief that they are all pretty decent and personable, except for Steve, who isn’t just a jerk, but a ‘jerk jerk.’ Joel Hoffman plays him well – he truly is a horrible piece of work, but that’s what he’s meant to be.

Against all sympathetic advice he’s given, Ed turns to the supernatural to avenge a particularly nasty tragedy, and following this careful groundwork, ‘Pumpkinhead’ becomes the sort of horror you want it to be. The blood and gore wouldn’t be as powerful were it not for the build-up, and Henrikson takes full advantage of the many-layered Ed Harley.

Things get a bit slasher-happy as the 83 minutes roll on, but it’s all done with the benefit of good characters and situations, and for a pre-CGI creation, the gargoyle-like titular monster is pretty impressive. Enjoyable. My score is 7 out of 10.