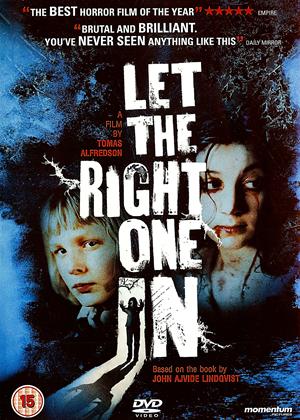 Rent other films like Let the Right One In

Unique, atmospheric and beautifully tender. - Let the Right One In review by CP Customer

Based on the book of the same name writer John Ajvide Lindqvist’s film adaptation of his own novel is extremely clever, he removes a lot of the horror, gore and character history and strips the novel down to its core story which is the relationship between the characters of Oskar and Eli. The result is something completely unique, a blend of vampire horror, social drama and coming of age tale which revolves around a beautifully tender and awkward relationship between a socially isolated twelve year old boy and a 200 year old vampire forever trapped in the body of a twelve year old child. Director Tomas Alfredson paces the film perfectly, never overcomplicates the story and captures genuinely outstanding, subtle and vulnerable performances from the films two child lead actors. There are scenes of violence and gore although they are never lingered upon, it just part of the narrative which has to be shown in order to illustrate what Eli is, how Oskar deals with that knowledge and is left to you as the viewer to pass judgement on the events unfolding on screen. Overall, at a time when every film studio and TV broadcaster is jumping on the vampire bandwagon, ‘Let The Right One In’ brings something completely different to the genre and to judge it as just a vampire film does it a huge disservice, this is without doubt one of the best foreign language films of the past decade and one which both fans of the vampire genre and foreign cinema should not miss.

Sensitive Vampire ! - Let the Right One In review by CP Customer

This film is frightening, it is sensitive. It is dark in tone yet beautifully filmed. It is well acted by the two young leads. Emotionally frightening issues are confronted, but overlaid by a growing love between two young people. The dour emptyness of death is set in a familiar urban environment co-existing with the normality of everyday life. This is a great film which balances conflicting emotions. Above all it's a great horror film.

Easy on the grue... - Let the Right One In review by Kurtz

I was so excited about the reviews of this film and so frustrated at its brief life at the cinema (Cheers, Kettering Odeon!) that I bought the novel to tide me over before it appeared on DVD- big mistake; the book is a headstomping, eyeballs out gruefest which would have made Stephen King wince, so when the movie finally re-appeared I approached it with some trepidation. Needn’t have worried though. The gore is reigned in here (though still present in short bursts) and the director focuses instead on the odd, dangerous friendship between the two leads. Brilliantly done with some fantastic shots of snowy Sweden. If you liked this, check out “Frostbiten”-what is it with the Swedes and vampires?

Vampires are currently in fashion but this Swedish film brings a new dimension to the legend. Subtle, understated and decidedly haunting, Let the Right One In is one of the best films of the year. The stark, bitterly cold and hostile winter environment is a unique backdrop to proceedings. Both the young leads perform well and Alfredson allows the story to develop without the needed for huge amounts of blood. An excellent commentary track is also included.

It is so good to see a modern film (admittedly based on a book so not an original idea) that can bring something completely fresh from an established theme. This film is much more than just a vampire flick though, it explores different emotions and issues and is remarkably touching.

Excellent, nothing gratuitous here - Let the Right One In review by CP Customer

Excellent film, thank you Sweden, quatre points. Sprinkled with intelligence, absolutely charming piano score accompanying many tender and thoughtful moments, camera work great, brilliantly cast. It reflects on, and deals with youth, aging, death, fear, relationships, parenting, the list is long. (This is a book too remember) Do not be put off by any talk of it being a horror movie, it is not, stay with it, watch it. Very very highly recommended. A film which is hard to fault. Nothing gratuitous here, there are some 'clinical' scenes yes, but this is a proper film. To compare it to another film is difficult, thinking.. Walkabout meets An American Werewolf meets The Concrete Garden.

Review - Let the Right One In review by CP Customer

Beautiful horror, brilliant directing. The recent American release (Let Me In) isn't a patch on this film.

Forget all that American stuff - this is a proper vampire movie. It's very scary - all the way through, but just wait for the end.....

It's very atmospheric and the suspense is tangible. One minute they are cute kids playing in the snow - the next ......

Excellent film - make the effort to read the subtitiles

My first girlfriend the vampire - superb stuff! - Let the Right One In review by RP

Excellent. I really enjoyed this film. Yes, it's a vampire film - but not some silly 'undead' coffin-sleeping virgin-attacking fang-toothed count-in-a-cape tale, nor yet a host of bloodsuckers attacking an unsuspecting town, or whatever the latest craze might be.

Set in 1982, it is a gentle tale about a bullied 12 year old schoolboy, who is befriended - and protected - by the newcomer girl next door, who just turns out to be a vampire. There's a lot of social mileage covered here if you look beyond the headline story - the role of drink in Swedish society, marital breakup, bullying, incidents happening unnoticed on our doorstep, the reluctance to report things to the police.

There is violence but, while shocking, it is not gratuitous in-your-face violence but plays an effective part of the story. There are no make-you-jump moments, but the film is all the more effective for that as it forces you to think ahead to what the conclusion might be. And when the conclusion arrives it is satisfyingly bloody and tastefully gruesome if there is such a thing...

The film includes deliberate ambiguity: is Eli (the vampire) a girl, or a boy? Is the ending a dream sequence?

Not bad but not that good. - Let the Right One In review by JD

As I write, 5 previous reviewers have given 5 stars and 4 have given 4 stars. I requested this DVD mainly on the basis of these very high ratings. I confess I am not a fan of horror. I always find myself wondering how they do the special effects and why the acting is so poor. For horror fans particularly of the child vampire persuasion this is great. For those who like a drama or action/adventure it is not worth the detour.