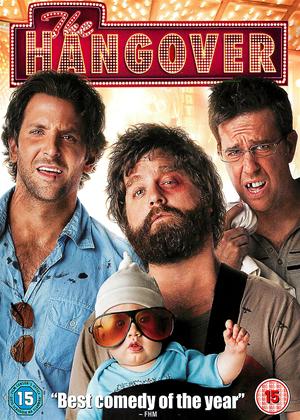 Synopsis:
They planned a Vegas bachelor party that they would never forget. Now they really need to remember what exactly went down! Whose baby is in the closet of their Caesars Palace suite? How did a tiger get in the bathroom? Why is one of them missing a tooth? And most of all, where is the groom?! What the guys did while partying can't compare to what they must do sober in an outrageous caper that has them piecing together all their bad decisions from the night before - one hazy clue at a time.
Actors:
Zach Galifianakis, Bradley Cooper, Justin Bartha, Ed Helms, Heather Graham, Sasha Barrese, Jeffrey Tambor, Ken Jeong, Rachael Harris, Mike Tyson, Mike Epps, Jernard Burks, Rob Riggle, Cleo King, Bryan Callen, Matt Walsh, Ian Anthony Dale, Michael Li, Sondra Currie, Gillian Vigman
Directors:
Todd Phillips
Producers:
Todd Phillips, Daniel Goldberg
Writers:
Jon Lucas, Scott Moore
Studio:
Warner
Genres:
Comedy

Reviews (3) of The Hangover

Being stuck in a desert is not everyone’s idea of a good time, but these fellas make the most of the gambling and pleasure capital of the world. Freed from the chains of domestic life, everything goes a little mental, leaving an almost permanent haze and fear of the unexplained.

Refreshingly The Hangover does not show you the misdemeanours of the bachelor party, instead concentrating on the after-effects and trying to piece together the events of the night before. Few answers are provided until the very end, Todd Phillips preferring to keep viewers guessing until the end credits role. The actual trip of remembrance is hit and miss. The characters form an unlikely bond and slowly, shamefully, the fog clears.

Generally the audience enjoyed the film, laughing for the majority of gags it produces. I actually felt it missed the mark on several occasions; too many characters were introduced before moving onto the next event in a rapid procession. Phillips does keep you guessing, with genuine laughs and regular forays into the gutter, with some candid visuals. Coming from the director that started his career filming GG Allin, this should come as no surprise.

Dude, Where's The Comedy? - The Hangover review by CP Customer

This is yet another film that boasts things like “Best comedy of the year” on the cover yet has very little in terms of real laugh out loud moments. This less of an all out comedy and more like a mild adult farce tracing back the events of a lost night. There are a couple of funny moments but overall the film is like "Dude Where's My Car", minus the comedy and set in Las Vegas. Director Todd Phillips has a pretty unremarkable record when it comes to making comedies and ‘The Hangover’ does nothing to improve it.

This would definitely not normally be my sort of film - Modern low budget American comedy - but I have to say that it was pretty funny and entertaining. Zach Galifianakis is brilliant as the immature Alan Garner but he is well supported by his 'newly discovered' friends and you really get the sense that they had a great time making this film and I had a great time watching it.