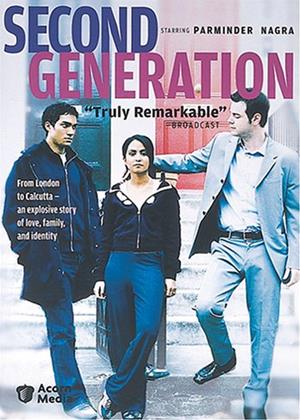 Synopsis:
Estranged from her family for nine years, feisty, independent Heere (Parminder Nagra) is living with her white, music journalist, fiancé, Jack (Danny Dyer). When her father, Sharma (Om Puri), falls into a coma, her older sisters, Pria (Rita Wolf) and Rina (Amita Dhiri), get back in touch. Sam is recruiting Uzi (Sonnell Dadral) for his underground record label, Monsoon. Sharma's friend and employee, Khan (Anupam Kher), intends on stopping conniving Pria from selling Sharma's food factory, however, Mohan (Roshan Seth) warns Khan not to get involved and thinks it is justice for Sharma swindling them out of their share of the business.
Jack and Heere go to Club 23 nightclub, where Heere meets Sam after years apart, they go back to his flat, and embrace but she regrets the encounter and leaves. Sharma wakes up on the day his daughters were set to turn off his life support machine. Meanwhile, Sam attempts to pursue Heere. Heere attends Sharma's puja with Jack where she is disowned by Sharma. Heere turns up with a friend at a meeting Sam is having with Jack. After Sam tells his elder brother, Firoz (Nitin Ganatra), that he has met Heere, and Firoz tells Rina, Pria then tells Heere that there is a rumour that Heere and Sam are having a sexual relationship. Heere confronts Sam and they end up having sexual intercourse. Sharma returns to work and sacks Khan after Khan reveals that Pria planned to sell the factory. Sam tells his father, Khan, (to Khan's dismay) that he wants to marry Heere. Firoz sides with the Sharma's and resents his father, Khan, for selling the factory, Khan then finds out Firoz and Rina are having an affair. After Heere rejects Sam, Sam ignores Khan's phone call and message and starts a sexual relationship with his work colleague, Amba (Shelley Conn). The next morning Sam finds Khan after he hanged himself. Sam and Firoz attend Khan's janazah (funeral prayer). During Khan's wake, Heere's attempts to console Sam falls on deaf ears. A drunk Mohan tells Sharma home truths about Khan and Sharma's daughters. Sharma realises the truth and gives his employees paid leave until the problems are sorted out. Sam goes to work to find that Jez (Jay Simpson) and Paul (William Beck) from non-independent label, Zenon, are pitching a deal for Uzi to his business partner, Parv (Chris Ryman). Sam fears that they want to buy out Uzi, turn Monsoon from a community-based label into a commercial product, and thinks artistic development is more important than money. Meanwhile, Pria, Rina and Firoz have Sharma sectioned with the help of Rina's GP husband, Arun (Shiv Grewal). Heere visits Sharma, who mistakes her for her mother, Sonali. Jack refuses Heere's request for Sharma to move in with them. Sam reluctantly signs a takeover deal for Monsoon to join Zenon. At the celebration boat party, Heere rejects Uzi's advances and Jack suspects Sam and Heere are having sex, and fights with Sam. Meanwhile, Rina plans on leaving Arun for Firoz.
Heere brings Sharma to her house, where he breaks down. Out of guilt, Firoz breaks up with Rina. Pria reveals to Heere that she found their mother after she committed suicide and resents their father for abandoning their mother. Heere's application to be Sharma's carer fails and she reconciles with her sisters. Pria sells the factory and Firoz is made the managing director. Heere ends her relationship with Jack, goes to Club 32, tells Sam how she feels about him and that she is leaving for India, and with Mohan's help smuggles Sharma out of the care home onto a flight to India. Sam apologies to Amba, gives Parv sole ownership of Monsoon and leaves the nightclub. Sam meets Heere and Sharma in Calcutta. Sam and Heere rekindle their romantic relationship.
Actors:
Radhika Aggarwal, Lalita Ahmed, Joanna Bacon, William Beck, Shelley Conn, Sonnell Dadral, Paola Desiderio, Amita Dhiri, Danny Dyer, Derek Ezenagu, Learie Foster, Nitin Ganatra, Shiv Grewal, Davina Hemlall, Perveen Hussain, Kaleem Janjua, Ashwin Juneja, Graham Kent, Anupam Kher, Aziza Kurtha
Directors:
Jon Sen
Writers:
Neil Biswas
Genres:
British Films, Drama, Romance
Countries:
UK

Unavailable
My Son the Fanatic

Unavailable
The All Together