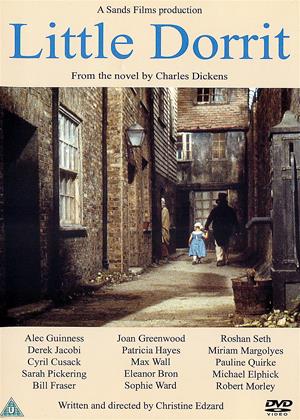 Very disappointing. We loved this version of Little Dorrit when it first appeared. But now it seems rather dated and not very convincingly staged (we've all been spoilt by computerised cities!). Also, the disc we received was poor, so the dialogue was hard to hear and no subtitles were available. So now we'll try the later Tom Courtney version available on dvd.

A good effort to film a complicated novel with many twists and turns. The acting excellent as well. - Little Dorrit review by ec

This movie does a good job of bringing to life the complexities of a Dickens novel. There is a real feel of Victorian England. The acting is excellent, especially Derek Jacobi in the lead. I look forward to seeing the second part.

This is a great double adaptation of the book, well acted by so many excellent actors such as Alec Guinness, Derek Jacobi and Max Wall. Miriam Margolyes is quite breathtaking as the effervescent Flora. The sets and the lighting are not only good but really do capture the essence and mood of the story.

Alas, the soundtrack is fatally flawed! Not even a small imbalance nor a subjective issue, but a great gaping monumental mistake in the mixing.

This film has the dialogue stem at a level about 10dB lower than either the music or effects tracks, with the effect that the music or ambience often drowns out the dialogue. To hear the dialogue, you will have to turn the volume up quite a lot to try to make out what they are saying, and when the music or a sound effect comes in you will be deafened!

(The final mix session of a film soundtrack is called the printmastering session, and the three previously mixed tracks for Sound Effects, Music and Dialogue (known individually as "stems") are brought together in a relatively simple session to make sure all is balanced perfectly. Traditionally, Dialogue is the priority track, which is why the lead mixer handles the dialogue mixing, it tells the story.)

The dialogue has been recorded on the production set, ie not overdubbed in a studio afterwards. Close up shots give quite wonderfully clear dialogue, but as the actor turns away or is more distant, the dialogue often becomes muffled and indistinct. Both Amy and Arthur are prone to bouts of soft whispering which become incoherent also. The opening scene with Arthur conversing in an Inn is a good example of the whispering problem.

So even without the -10dB dialogue mixing fault, the soundtrack has other problems, which is a really bad shame as the script contains so much of Dickens's classic mastery of descriptive language.

Not all is lost however, this film can be enjoyed with skilfull use of the volume control and really hard concentration, coupled with some attempts at lip-reading.