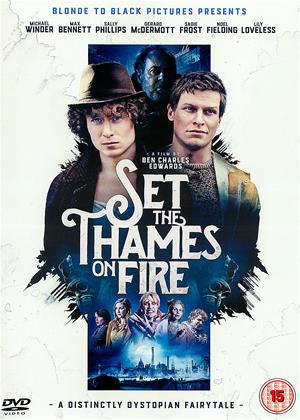 Reviews (1) of Set the Thames on Fire

… in which Salvidor (Max Bennett) – ‘the pretty one’ – and Art (Michael Winder) – ‘the ugly one’ – meet up and decide to raise enough money to go to Egypt. On their way, they meet a variety of extreme and brilliantly played characters. Sadie Frost, Sally Philips and Noel Fielding (now co-host of family-friendly cookery shows, here playing a foul-mouthed sex-crazed cross-dresser) are exceptional in these roles. David Hoyle plays probably the most affecting of them all, a down-on-his luck, tired old magician. His character in particular represents what ‘Set the Thames on Fire’ is all about – extravagant and often hilarious superficiality hiding a pure, terminal melancholy.

To say this film is merely a ‘great experience’ is difficult, because the heart of it is difficult to pinpoint. It has been described as a tragicomedy, and uses its low-budget as an advantage, making deliberately dream-like locations and architecture with only one foot in reality.

It is sick, seedy and tragic – so how then, is it also so genuinely funny? A skilful balancing act on behalf of director and writer Ben Charles Edwards and Al Joshua, that’s how.

It reminds me in part of 1989’s extraordinary ‘Sante Sangre’ in its absurdist setting, with characters that seem inaccessibly strange, but that are in possession of real humility once we get to know them.