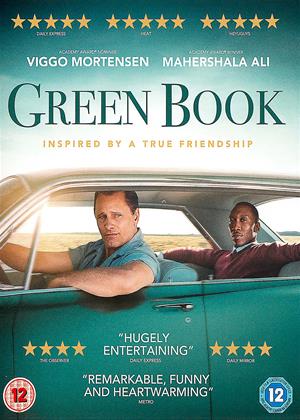 OK maybe it is a bit trite.... but it's still a belting film! - Green Book review by PR

...made so by both lead actors putting in an excellent performance. Apart from the odd twist the plot is predictable but it's no less enjoyable for that. To the critics who say it deals with 60's racism in the States in a glossy superficial way. Ok. Fair enough. But what we always seem to forget is that first and foremost a film is meant to entertain. A film that doesn't do that, on at least some level, is never going to get anywhere. And then you'd never even get the debate...

11 out of 12 members found this review helpful.

Please don’t be put off by some of the inaccurate and bigoted reviews posted here.

This is a superb movie and well worth all the awards and oscars it has been given.

Set in 1962 it depicts a sad period in America’s treatment of racism in the Southern States.

The acting by both the lead actors is superb, but many or the smaller parts are very good too.

Great atmosphere where the old cars, concert halls and landscapes feature strongly, but it is the relationship between the driver and the concert pianist that makes this such a memorable film.

One of the best movies I have seen in this or any year.

Entertaining film based on a true story. Ignore the low scoring negative reviews because Im not even sure if they watched the whole film.

so it has its faults and is a bit smultzy and over simplistic but it was a movie the whole family could watch. that normally means Pixar for us but this had real world issues at its core and we all enjoyed it. We even discussed it afterwards.

Great film. Well acted without over statement of the obvious. Period backdrop pretty much seamless. Makes all the right points without being patronising.

I totally agree with the 5 star reviews. This is an amazing story, based on true story, written by Tony’s son, based on interviews with his father, family, letters his father wrote and from interviews with Dr. Shirley. I spent some time in Virginia during this period and nothing in the movie is exaggerated. Acting absolutely the best. I had seen the movie at the Cinema but wanted to see it again and to watch the special features (thank you Cinema Paradiso!). To me, this was a perfect movie. Tony’s son said that Viggo Mortensen’s portrayal of his father was so authentic it was almost scary. I highly recommend Green Book.

The true story of the unlikely friendship between Tony Vallelonga and Don Shirley is so compelling that any professionally made film could not fail to interest the viewer. But this film seems to dip its toes into the cauldron of racism in sixties America, and finds it too hot. The result is entertaining enough, but feels sentimentalised and anachronistic in its treatment - a sort of 'Driving Miss Daisy' in reverse, and 'white saviour' criticisms are not unfounded. For this viewer, Vigo Mortenson's stereotypical portrayal of a tough Italian New Yorker was not convincing adding to the inauthentic feel of the film; and I would strongly recommend Spike Lee's 'Black KKlansman' as a much better, more authentic film dealing with similar themes.

The critics hated it when this won Best Picture Oscar 2019, and I agree that it's a mediocre movie - though deplore the race-obsessed over-rated director Spike Lee's tantrums. This movie is way better than any of his! I may try watching it again at some time to see if I revise my opinion, but I was bored watching this. Noting original or memorable here.

However, it was the same critics and campaigners who demanded more African-American voters in the Academy and more black Oscars, so this is what you get when you rig the voting.

For me, John C Reilly in STAN AND OLLIE should have won the Best Supporting Actor Oscar and the actress playing Stan's Russian wife should have won best supporting actress. It now seems true, however, that those who are not 'people of colour' are disadvantaged in winning Oscars, that merit is not the true judge any more - if it were was. The Oscars will become more irrelevant as a result, however, as have many awards which seemingly exist to promote 'diversity' (i.e. ensure the award doesn't go to any nasty supposedly privileged white man!). A shame really that these days merit is not all. Race politics and pc is what it's all about - % diversity, not talent.

It is what it is. 2 stars. Too race-fixated for my tastes.

Also, this is not a copy of superb French film 'Untouchable' - totally different story. UNTOUCHABLE is a great French film which was remade in the US as THE UPSIDE. Not this. Maybe the reviewer means DRIVING MISS DAISY which this does resemble?

3 out of 17 members found this review helpful.

A really good film telling its story in an engaging way and getting you involved with both the leading characters who emerge as considerably more than their archetypes.

Excellent performances from both Mortensen and Ali carry the narrative forward.

A classic road trip movie. It is a mainstream Hollywood movie so expect some sentimentality and a happy ending (as maybe it happened for real!).

The background story/mileu is interesting as well, although not important unless you are hung up on the story of race relations in the USA - in which case I guess you'll either love it or hate it according to your preconceptions and prejudices and miss the opportunity to enjoy it as a good piece of movie making. Life is not black and white.

I loved this film!! Amazingly for me its a best Oscar winner that's thoroughly entertaining and affecting. The old cars, clubs and music from the era are brilliantly portrayed but it is the friendship between the characters that affects the most.

seen for 5 years, it had everything. Watched it twice and enjoyed

it the second time as much, a sure sign of great film

3 out of 3 members found this review helpful.
Show more

The most infamous and hilarious scene of Green Book, at least according to the boomer audience that gravitates towards such soapy pictures, features fried chicken. The cocky white driver and the rigid black passenger in the back seat dine on this lunch from a bucket. The black man remarks he’s not familiar with eating fried chicken and is informed by the white man that you eat it with your hands and toss the bones out the window. In order for this scene to be funny, however, the black man would have to be from another dimension and not the south.

The passenger is Don Shirley (Mahershala Ali), a pianist on a concert tour. Of course, being a black pianist during the 1960s is a tough road. Many places around the midwest banned black people from entering, noted in the green book. But this film is not about Shirley so much as it is about his driver Tony Lip (Viggo Mortensen). Tony is a racist bouncer with a brash attitude that clashes with Don’s more strict and tight-lipped professionalism. Squint long enough and their pairing on this cross-country music tour will seem more like a buddy comedy and less like a white savior movie.

Green Book is a very tempting kind of white savior movie with the conflicting direction of comedy director Peter Farrelly. The chemistry between Don and Tony is staged to place them more as an odd couple; Tony is filthy while Don is clean. In doing so, however, Peter’s film slides far too uncomfortably into the fluffy narrative of the white savior. Issues of racism and even the interesting angle of the green book itself are glazed over for all the familiar beats. A bunch of racist white guys will try to harass Don for poking his head where he doesn’t belong. But, look, here comes Tony to save the day. Maybe Tony isn’t such a racist after all. Maybe he and Don can be friends. Maybe racism can be solved in the 1960s.

It’s easy enough to see why many older white audiences favor such a film. It never takes a hard look at the racism of this time and instead weaves a microcosm of solving one of issue of a black and white guy getting along. The whole story is staged to be sweet and nostalgic with a sincere appeal to buddies conquering their racial divide. It’s also bereft of insight, warping just enough of the true story to never be uncomfortable for the white crowd and the dishonest to the family of Don who has denounced the film.

I can’t deny that I enjoyed the performances of Mahershala and Viggo who undeniably have chemistry. But to what end is their buddy comedy serving? What does such a picture offer that numerous other white savior pictures haven’t already delivered before? The Seth Meyers segment from his talk show that directly parodies white savior movies is so on the nose it's amazing how many of these films continue to pollute that market of historical drama. This is a film that talks about racism but never REALLY talks about racism. How else can we laugh at this comedy?

This is why it’s so hard to just switch off the brain and accept Green Book as the comedy so many aged moviegoers adore so well. It’s built so stock to appeal to this crowd of racism-ignoring white people that it was safe enough to be both nominated and win the Academy Award for Best Picture. Compared with the more visceral racial picture of Spike Lee’s BlackKKklansman also being nominated, Green Book is woefully behind the times and yet giving the edgy white audience exactly what they want; an easy to digest picture where we never have to think more about the story with the exception of the funny scene where the guys eat chicken. The film is perhaps is best summed up in a Saturday Night Live bit where a talk show host says to a faux Mahershala that he had issues with the ending of fried chicken. Mahershala corrects him that the scene was not the end of the movie. “Well, it was for me.”