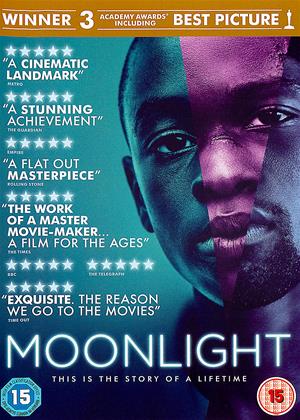 A so-so single issue film - and all black cast too. - Moonlight review by PV

Well the Oscars often get it wrong and will do so more and more now they have gender and race quotas (unofficial). So this neat the dreadful LaLa Land to the best picture Oscar - GREAT! But it really is not that great. It's different because it has an entirely black cast with not a single white face anywhere in the movie - yet that really is the way some areas in the USA are. However, it's not a patch on HBO TV series The Wire in exploring that location and African-American culture.

All set in Miami's black areas, it starts on the street where drug dealing is happening - this is an areas where a white face should never go really and neither should anyone looking gay. The main character is bullied supposedly because he looks gay but I did not notice this at all - he wasn't effeminate in any obvious way which is what characters seemed to notice!

Anyway, the way repressed gay men often macho-up to 'prove' they are not gay is explored here - and that is the most effective part of the film, which starts strongly then sags a bit. Black communities are well-known for their often angry and violent homophobia - I think in the USA, in a poll a majority of African Americans would make homosexuality illegal, and the figure may well be the same in socially conservative ethnic groups in the UK (though we have 4% black population and total ethnic minority of 16%; the USA has 12 or 13 % black with whole areas 100% black and has had these for years - centuries even).

Watchable BUT turn on the subtitles would be my advice (the same with The Wire) because Afro-American is a dialect which is mumbled at best so hard to understand!

I didn't dislike this film, and it's theme is unusual and therefore interesting (I have come to loathe Hollywood movies whether action-based or emotional dramas). But feel it's over-rated, and it clearly won the Oscar because it was an all-black movie which matters in race-obsessed affirmative-action America. But at least it beat the utterly dreadful LaLa Land so well done for that! Anything that stopped that mediocre mess winning anything is fine with me!

9 out of 16 members found this review helpful.

Rarely if ever have I seen a film that gives such a relentlessly negative portrayal of Black working class life.

It depicts a world in which lethargy, casual violence, and self-destructiveness rule, in which drug-dealers are the only positive role models in their community, and in which there is seemingly no-one around with the guts or the self-awareness to challenge the way things are. Chiron's mom is a respectable citizen in the first segment of the film; by part two she has become a drug addict for no apparent reason. At one point some teens play "get down, stay down" - a sort of endurance game in which one boy gets voluntarily punched in the face repeatedly and the aim is to see how many blows he can take before he rises no more. What better illustration of the levels of male self-loathing in this community?

It's bleak and often very uncomfortable viewing. At least the writer-director had the courage to remain true to his fatalistic, cyclical vision of humanity - I respect him for doing something different instead of falling back on cliches about redemption and social justice. Perhaps sometimes it is also necessary to hold a mirror up to the disreputable aspects of society as a challenge to them to improve themselves and stop blaming others for their degradation.

But I would not want to see it again - I would rather watch films that portray multi-faceted urban black communities and emotionally complex individuals.

3 Academy awards including best picture? Were they watching the same film I saw? I must be stupider than I thought, because I struggled to make sense of any of the film, and I found Chiron's inability/refusal to communicate intensely irritating. I fail to see what new light it shone on the plight of poor people or gay people and the character's race never seemed to be an issue. Too much camera-lingering on inexpressive faces left me puzzled and bored and it was frequently touch and go as to whether I would make it to the end. Assuming it must be me at fault, I forced myself to watch the whole thing and was left with the strong conviction that I had wasted 111 minutes of my life.

When I see a film with the accolades like those on the main picture I get very dubious. However, having seen the film, I read them and whole heartedly agree. This film was simply stunning. I think the other reviewer watched the wrong film. This film is a must see. I was rivetted. Superb acting, direction and at times visually stunning.

This is a beautifully acted portrait by several actors - all equally good - of a humble character from a very disadvantaged background.

As you can see from the title, really didnt enjoy this film. I was curious after all the hype but not for me. I just felt so sorry for the main character all the way through and no happy ending.

For an Oscar Best Movie I was expecting more then I got from this film! For the me the story line got bogged down and the ending became a very big let down. Full praise to the cast for giving acting performances that were excellent with such limited options to excel!

I agree with the previous comment. 2 stars is generous. Boring, boring. I am sick of films where you cant understand what they say!!

So many layers... - Moonlight review by CB

A film which justifies its Oscar ratings!

The reviewers who got depressed or angry watching this film must have a heart deficiency. For sure the main character was going through a hard time being gay, and bullying is common in schools...but the care and love shown by two of the main characters shone through, and the ending was redemption....not depressing! Sheesh

I wasn't sure with all the hype what kind of movie it would be but it was far tamer and on the respectful side. There was no judgement in the movie - just this is how life is. The actors brought dignity to role but there wasn't really much left.

Oscar who? - Moonlight review by AD

So a poor gay black kid gets taken under wing of a nice black drug dealer and grows up... a nice gay black drug dealer. It took a looong time to narrate and honestly, 2 stars is being generous. A film for people with a very high boredom threshold and very good hearing.

1 out of 5 members found this review helpful.
Show more

Okay, so, in order to objectively justify my average ratings for this film, let me elaborate on how I end up rating films after all’s said and done. So, according to me, a film’s quality can be gauged on three general levels: Competency or how it’s shot; good Story or whether it’s relatable or not; and Creativity or how original a given film is. If a film has nailed competency, but falters at either of the next two variables, then the film is not good. If it manages to score a 10/10 in the category of good Story, then the two remaining variables don’t matter, so we can neatly say that the film is good. If the film nails creativity and falters at the previous two categories, then we say that “hey, at least the film was original and creative” and we stop at that. Moonlight is competently shot, has a mediocre story, and is not original – which makes it the perfect mediocre film in my book.

Moonlight is directed by Barry Jenkins, and follows Chiron (Ashton Sanders) – a runaway African-American boy who hides from his abusive mother Paula in a motel. Soon, the boy (nicknamed “Little”) is found by another crack dealer (named Juan, played by Mahershala Ali) and is brought home to his girlfriend Theresa (played by Janelle Monáe). The two form an unlikely mentor-student duo as Juan tries to fill the missing father figure after which Little so desperately craves – despite the hostility from Paula. To great disappointment of everyone, this is where Juan’s story ends and the audience is reminded later in the film that he is now actually dead.

In the second segment of the film, Chiron is introduced as a teenager who often gets bullied by his peers (because of his withdrawn nature and possible homosexuality as well). All of these issues are presented not only as Chiron’s hardships – but as genuine problems within the African-American community as well, which is something director/writer Barry Jenkins isn’t afraid to push forward. Then, Chiron meets Kevin at the beach in a romantic encounter that proves detrimental to their friendship, since Kevin later belittles Chiron and leads to the latter smashing a chair over him in front of the whole class. After this incident, Chiron is taken by the police and put in a detention center for juveniles. This is where the second act ends.

The third act sees Chiron reconciling with his mother, with Kevin, and this is where the film runs out of gas. In fact, the film is basically over by the time Chiron realizes who he is and accepts his identity in the face of great adversity. Curtains roll.

All things considered, Moonlight is not a bad film, it’s just is not a masterpiece either. The dynamic in the beginning is hampered by the slow pace in the third act, and this fact alone makes Moonlight a perfectly mediocre film at that. Still, not bad.