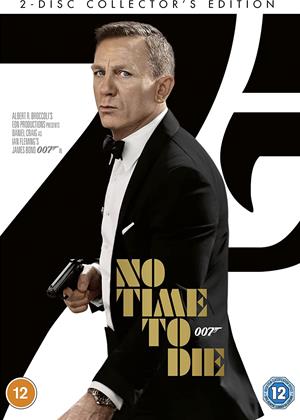 As most J Bond films, this is good entertainment, but the plot is both implausible and predictable, and the story a bit shallow. D Craig is an ageing Bond brought out of semi-retirement in order to save the world. There are plenty of action scenes and pyrotechnics, and that is about it.

J Bond is a faithful lover who does not even think of sleeping around: even Ana de Armas is unable to lead him astray (and, in fact, shows little interest in him)! J Bond's romantic focus is Lea Seydoux, who has a tendency to look as if she has been sucking on bitter lemons for the past few days and is not enjoying any of it. When J Bond is brought out of retirement, he realizes that a new '007' has been appointed: Nomi (black British actress Lashana Lynch). So, we have a bit of virtue signalling thrown in for good measure: the ageing, straight white man is due to be replaced by a robust and super-fit black woman. (There is no indication, sadly, of her sexual preferences, however.)

This is a James Bond for the politically correct 21st century, without too many surprises, except one, towards the end, that one will not reveal. If you like Bond films, you will enjoy this one too. It is not bad, but it is not outstanding either, somehow.

Action Packed 007 - No Time to Die review by GI

The great thing about the James Bond films is that it doesn't matter how far fetched, even absurd, they are it still feels like they're taking place in the real world. This, Daniel Craig's fifth and reportedly last, outing is an action packed, funny, full of complicated plot mechanisms (you need to be well up on the first four films), exciting and confident movie. If you love Bond you'll love this. It's been well worth the wait to be honest because it delivers, with the usual panache, a real barnstormer of an action film. James Bond has left MI6 and, his love life in tatters, has retired. But when a British secret biological weapon is stolen the CIA's Felix Leiter (Jeffrey Wright) seeks out his old friend to help. Reluctantly Bond agrees but has to deal with old enemies, new enemies, some surprising allies and some who bring old emotions back to haunt our hero. There's lots of big 007 tropes not least a creepy baddie and his lair that Bond must penetrate to save the day. Here we see James Bond at his most vulnerable, emotional even, something Craig has inserted into the character (although George Lazenby had set the course back in 1969) and I admired the links to some of the books, in particular You Only Live Twice, which is totally a different story to the film version. (If you know this book it will give you hints as to where the story goes) The film has a fantastic prelude sequence before jumping five years to the main story. The action set pieces are fast and exciting, there's loads of gunplay and some big surprises along the way. Great support cast of Ralph Fiennes as M, Ben Whishaw as Q, Christoph Woltz as Blofeld, Naomie Harris as Moneypenny, Léa Seydoux, Ana de Armas and Rami Malek. It's not the best of Craig's Bond series but it's certainly a big, brash and very worthy addition to the franchise.

Out of the five Daniel Craig films, I'd rate this as third best after Casino Royale, and Skyfall. It has lots of good set-pieces, the action-packed chases in Italy (seen in the trailers for the last 2 years - nearly) and a snappy cameo from Ana De Armas as a scene-stealing special agent. Rami Malek's villain is interesting too (but not very complex) although his scheme for a world domination is cool this for this run around. My problem with No Time To Die was that it was a bit broad, the comedy doesn't work, and Bond's team (M, Q & Moneypenny) are left with little to do except quip / frown. The storytelling risks are not very good but well-played (I won't call them twists), and I think it was all a bit predictable if you think about how there's been much talk of making Bond more modern / less misogynistic / more human / relatable - bu then he's lost his uniqueness / his edge, so here we have a softer character that you might get mixed up with Dwayne Johnson's agent in Central Intelligence. haha.

The action delivered though, so I was impressed.

James Bond has certainly gone through a lot of changes with the Daniel Craig run. We saw a much sterner approach to the business of spy missions in Casino Royale. We saw that bitterness at losing the girl carry over into Quantum of Solace, establishing more of a serialized nature for this series of films. We saw his organization undergo some massive restructuring in Skyfall, where key characters would bite the dust. Spectre, sadly, was more of a return to form as Bond beats back on Blofeld. Thankfully, No Time To Die pulls out just a few more subversions before Craig bows out of the Bond title.

The film picks up where the last one left off with Bond trying to go on a romantic getaway with Madeleine Swann (Léa Seydoux). Their vacation is cut short when Bond finds himself still being targeted by Spectre despite having successfully imprisoned the leader of Blofeld. Keen enough to notice the pattern, Bond decides to ditch his entire lifestyle. The secret agent missions, the loyalty to queen and country, and the romance with a girl who will most certainly die or split at some point. Bond rejects the title 007.

Naturally, since this happens early in the film, Bond finds that he can’t stay away forever. There’s a three-way battle underway between MI6, Spectre, and some unknown terrorists that is resulting in conspiracies and double-crosses. This is clearly a mission for the man with the most quotable name delivery, even though he no longer works for MI6. Of course, Bond can’t run from the past and, unlike previous Bond pictures, this bitter past is addressed and tackled head-on as Bond goes on another adventure.

For the more traditional Bond fans, relax, all the familiar tropes are still here. Bond still gets into thrilling stunts, as when he races around the crowded corners of a mountain town with a motorcycle, making ridiculously dangerous jumps. The toys are back once more as Bond’s indestructible car lays waste to Spectre hostiles with its headlight-hidden miniguns. There’s a one-shot Bond girl as well (Ana de Armas) who looks good in a dress. Though she does more butt-kicking than making out with Bond. In fact, their meet-cute situation doesn’t lead to a sex scene.

So, yes, this is perhaps the most subversive of Bond films but that’s kinda been the march of the Craig era thus far. Traits that were once disposable in Bond movies have now become part of a long-running narrative. Remember that girl who bit the dust in the first Craig Bond movie of Casino Royale? He hasn’t forgotten her and that death still haunts him about the future the spy can have. Remember Blofeld from Spectre? His presence still lingers and plays an important role in Bond’s return for vengeance. Nobody is safe either as returning characters may not survive every dangerous encounter.

The most controversial call may be Bond’s replacement for Nomi (Lashana Lynch). She takes on the title of 007 and treats Bond’s departure with bitterness, filling shoes that were once that of the greatest spy in MI6. Nomi slyly states that MI6 wouldn’t just retire a number and it is just a number as the two of them later admit when they learn to work with each other. Also, Bond gets the title back soon after so calm down, Bond traditionalists.

The weakest part of the picture is by far the villain. Rami Malek tries his best to play a terrorist mastermind who specializes in bioweapons and seems to take inspiration from the Japanese. But he can’t do much when his character is only meant to calmly ramble in simple villain platitudes of cleansing the world and getting rid of the evils that he deems as such. Bond at one point states that the villain is just one in a long line of angry men. In the Bond villain line, he’s seated more towards the back, perhaps behind that dude who wanted to manipulate the media in Tomorrow Never Dies.

No Time To Die does have just enough twists to warrant a fitting end for Bond. Enough risks are taken so that it’s more than just the same old James Bond movie. However, so much of it comes so boldly telegraphed that it’s almost predictable where the somber finale is headed towards. It’s a solid James Bond movie in this regard and is sure to occupy the middle portion of everyone’s list on the best of the Craig era for the iconic spy character.