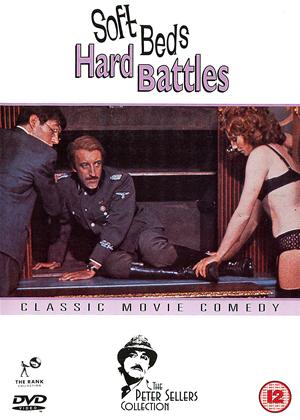 I really enjoyed this film - not a classic but funny nonetheless.

Firstly, it's always fun to see Nazis coming to a grisly end, especially in a Paris brothel.

Secondly, Peter Sellers is such a genius mimic, I could watch him in anything. Here he plays an old French general to perfection, and also does his upper class British officer impression (which he uses in several movies including Dr Strangelove).

Thirdly, I like the way it whizzes through the war in 90 minutes!

And finally there are some laugh out loud gags and great characters.

I know they'll never show this on TV, mainly because one character Peter Sellers plays in a Japanese General/Prince - and TV esp the BBC have effectively banned any white person ever doing impressions of ethnic characters. That's a shame esp as the opposite is allowed. The same fate has befallen classic comedy It Ain't Half Hot Mum (thankfully available on DVD via CinemaParadiso!). The Millionairess is a better movie and has Peter Sellers playing an Indian (and singing Goodness Gracious Me). These films should all be seen in context BUT they should be seen and broadcast. I feels rather like living in a totalitarian state when the 'politically correct' Politbureau decide that the people must never see such things again.

Also, this was made by and with people who had lived through the war and been in it on both sides YET they can laugh about it. These days it'd be considered 'offensive' by the pc guardians of taste and decency no doubt. One more reason to watch and laugh then!

A middling entry to the Peter Sellers CV (and also featuring a performance by Timothy West and great German actors too).