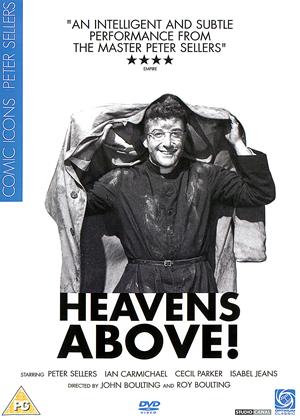 Synopsis:
Oh brother! Peter Sellers as John Smallwood, an idealistic Reverend appointed to the parish of an upper-class village by mistake. With a bad habit of telling the truth at all times, Smallwood makes several clerical decisions that shock his wealthy, landed-gentry parishioners. When he convinces the selfish owner of a laxative firm (Isabel Jeans) to "see the light" and sell off all her holdings on behalf of the poor and downtrodden, by doing so the woman wrecks her business - which is the principal source of income for the community where Smallwood works. Retreating from town with an angry mob on his heels, Smallwood relocates to a tiny island in the Pacific.
Since the island is the site of a missile base, and since the local astronauts have shown signs of agnosticism, where else is there Sellers to go....but up? Inspired by an idea by British satirist Malcolm Muggeridge, the Boulting brothers' Heavens Above! was considered a bit too sacrilegious for general consumption on its 1963 release. Way ahead of its time, the film, featuring Sellers at his most iconoclastic, has since accrued a loyal and vocal following. A superb supporting cast includes Eric Sykes, Irene Handle, William Hartnel and Joan Hickson.
Actors:
Peter Sellers, Cecil Parker, Isabel Jeans, Ian Carmichael, Bernard Miles, Brock Peters, Eric Sykes, Irene Handl, Miriam Karlin, Joan Miller, Miles Malleson, Eric Barker, William Hartnell, Roy Kinnear, Joan Hickson
Directors:
John Boulting, Roy Boulting
Writers:
John Boulting
Others:
Max Greene
Studio:
Optimum
Genres:
British Films, Classics, Comedy
Countries:
UK

Reviews (1) of Heavens Above!

As is so often the case, here is a good film trying to punch its way out of a thin, poorly constructed, baggy production.

Orbiston Parva is a well-heeled parish, the residents stuck in typical mores: I'm comfortable, I want more, I don't give a fig for anything else. So when a new vicar arrives, one who believes that people who profess to be Christians should lead a Christian life, the outcome can only mean trouble.

Of course comedy is a perfectly legitimate tool to tackle such a subject. Satire can be a magnifying glass or a scalpel. It can deflate the pompous. But it doesn't work if it can't show it's fighting on the right side. When an overflowing family of gypsies are evicted from a field, and the Rev. Smallwood rehomes them in the vicarage, any idea that he is right and the men in suits wrong is vitiated by portraying the family as spongers and thieves. When a food bank is instigated, the implication that this is absolutely the right thing (the Christian thing) to do is scuppered by the ridiculous concept that anybody and everybody can turn up and just do their big shop there - for nothing; turning the main street into a ghost town.

It would seem the Boulting Brothers had no time for do-gooders, but they needed to do better than this to show why. It is also ridiculously long. The ending is a stupid bore.