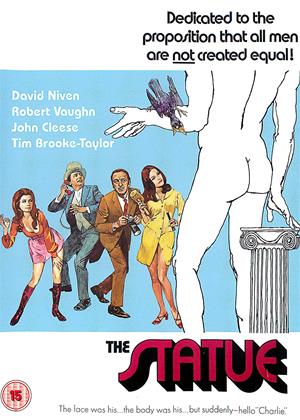 Reviews (1) of The Statue

This is one of those movies based on stage plays that for a brief period in the last 60s were very popular, no doubt an innuendo-drenched reaction to the lifting of stage censorship by the Lord Chancellor in 1966.

Other plays in the same vein are NO SEX PLEASE. WE'RE BRITISH and THERE'S A GIRL IN MY SOUP. None of this stuff has aged well. Benny Hill has - watch that on YouTube.

These days, it looks SO dated - as if the sight of a penis on a statue would be enough to get an A certificate or a ban. Maybe it was funny in the late 60s/early 70s. Now it's more a curiosity piece. No doubt these days the feminists would call it sexist and get hysterical. It may therefore be fun to organise a MeToo film show just for them!

John Cleese plays a funny character - a psychiatrist who hates patients and psychiatry - and Tim Brooke-Taylor also there doing a posho character, suited to these public school-educated Python-esque comedians.

3 stars - for students of film either.