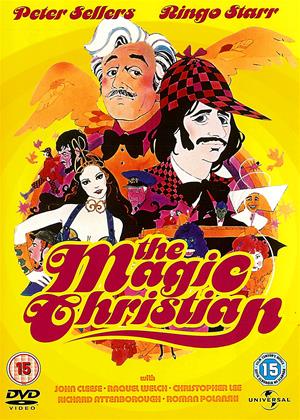 Reviews (1) of The Magic Christian

Joe McGrath was a peculiar director. Almost all his films, which usually starred Peter Sellers and/or Spike Milligan, were a chaotic muddle of good ideas and utter incoherence, not unlike the patchier episodes of "Monty Python's Flying Circus". This is no exception. Almost plotless, it's really a series of themed sketches in which Sir Guy Grand (Peter Sellers), the world's richest and most cynical man, tries to find out how far everybody else will go for money. He does this by using his limitless wealth to set up elaborate pranks, the most outrageous of which involves persuading hundreds of smug rich twits to embark on a luxury cruise where everything is secretly under his complete control. It's almost a precursor of "The Truman Show", mashed up with a few of those Monty Python sketches where some poor schmuck just wants to buy a pair of shoes, but reality has inexplicably broken down and the staff in the shoe shop are reenacting the Battle of Waterloo with real cannons or something.

Unfortunately it doesn't quite work. The oh-so-sixties anti-capitalist message gets a bit confused, and sometimes the antiheroic protagonist seems to be tormenting random passers-by who haven't done anything at all to deserve it. Also, the sheer hypocrisy of an obscenely rich man looking down on everybody else for wanting a little bit of what he's got far too much of is left oddly unexplored. And then there's Ringo Starr. Obviously in 1969 if you could persuade 25% of the Fab Four to co-star in your movie, you'd jump at the chance! Alas, being the least worst actor in the Beatles doesn't necessarily mean you're any good, and Ringo isn't. In fact, he's a complete waste of space whose dim-witted character exists purely for Peter Sellers to have somebody to do plot exposition at. He also appears to be trying very hard to deliberately ruin the funniest scene in the film, Spike Milligan's brilliant cameo as the traffic warden who finds out that every man has his price.

Viewed as a compilation of almost stand-alone comedy sketches, it's a pretty funny film which sometimes manages to be hilarious, and goes off on so many weird tangents that it's full of surprises. Viewed as an actual film, it's just Peter Sellers playing a lot of absurdly complicated practical jokes for a very contrived reason, while Ringo Starr follows him around being dense. And although the numerous celebrity cameos are sometimes amusing, most of those stars were obviously shoehorned into the movie for about a minute each just to get a lot of famous names on the poster, and they don't really contribute much to the film. What it all adds up to is silly lightweight fun that's sometimes very inventive indeed, but never manages to cohere into anything you could honestly call a story. If you don't have a problem with that, there are considerably worse ways to spend an hour and a half.