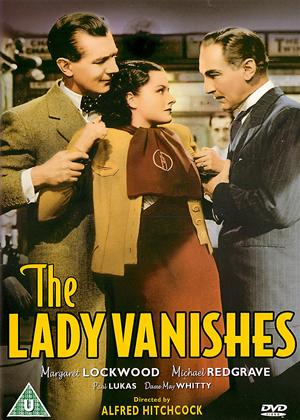 Reviews (4) of The Lady Vanishes

As war in Europe became inevitable, this is the film in which various British dilettantes, obsessives and eccentrics put aside denial and appeasement and finally realised that they had to fight or die.

In his film debut, Michael Redgrave is a musicologist researching middle European folk music and becomes (initially) antagonistically entangled with Margaret Lockwood's pleasure-seeking it-girl on one last fling before marriage.

On a train back from the Balkans, dotty dowager/secret agent Miss Froy is abducted and only Lockwood and Redgrave are willing to get involved, while they backchat and fall in love.

This is a classic of Hitchcock's British years, fast paced, suspenseful (of course) with a brilliant cast of support characters, particularly the immortal English everymen, Charters and Caldicott. Even Hitch's genius is matched by a superb screwball script from Launder and Gilliat. It's just so gloriously entertaining and the ultimate train film. Hitch’s releases before he left for Hollywood stand isolated at the peak of UK cinema of the thirties.

Proving that nobody does it like Hitchcock, this movie is a shining example of mystery and suspense without the need for gratuitous violence or other degeneracy so loved by the contemporary Hollywood scene. Those weaned on Tarantino will find it too tame - but lovers of such writers as Agatha Christie or Ngaio Marsh will have a lot of fun.

This may be over 80 years old yet is way more entertaining than most modern movies.

Also it is prophetic - made in 1938 and set in a fiction central European state, it somewhat predicts the way the continent would be ravaged by war within a year.

Based on a short story, I believe, and full of the spy-sage mystery reminiscent of The Riddle of The Sands and other fiction post 1904 when Britain signed the Entente Cordial with traditional enemy France, and instead faced the enemy of 'new' country Germany. This is very much a post WWI story.

I loved it. I also find it shocking how bad so many modern pc woke movies are by comparison, No CGI here just clever use to backdrop film reels. Some clever direction. Amusing too how most of these old films (anything before the 1990s maybe) has scenes which would now get labeled sexist or racist or even 'sexual assault', Show how much we have regressed maybe from a better unwoke age.

It's old but class is timeless. It is Hitchcock, after all. - The Lady Vanishes review by ND

All of the character acting is such a pleasure to watch, the supporting cast is peerless. The principal actors are superb. Of course you have to view some of the script with its age in mind. Things were different then, most especially attitudes towards women but this was three generations ago so it should feel different.

The direction is as good as you'd expect. The pace never flags, the story is well told and frankly, it has aged very well indeed. I commend it to you. By the way, it should never occur to you that it's 'only' in black and white, it doesn't matter at all.