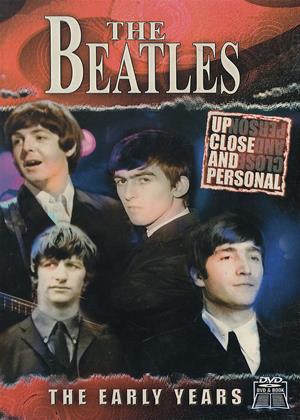 Synopsis:
This feature takes you on a journey into the very heart of the most successful and influential band of them all. Through the memories, recollections and insights of those who knew The Beatles best, the programme examines the creative processes and personal chemistry that contributed to some of the greatest music ever made. Among those interviewed are Pete Best, the group's original drummer who was unceremoniously sacked in 1962 and Norman Smith, the band's sound engineer from 1962 to 1966. This is your chance to get up close and personal with rock's greatest band; to discover how the band made the amazing creative step from 'Love Me Do' to 'Sergeant Pepper' in just four years.
The video also features superb rare footage of The Beatles in action in concert and in the TV studio.
Actors:
Allan Williams, Pete Best, John Lennon, Paul McCartney, George Harrison, Ringo Starr, Norman Smith
Aka:
The Beatles: Up Close and Personal: The Early Years
Studio:
Storm Bird Ltd
Genres:
British Films, Documentary, Music & Musicals, Performing Arts, Special Interest
Countries:
UK

Rent other films like The Beatles: The Early Years

Reviews (1) of The Beatles: The Early Years

Watchable but poorly made - The Beatles: The Early Years review by AH

This has a good set of interiews to it, but it's poorly made. The sound and dialogue of the interviews is constantly drowned out by the background music or the side by side footage of the beatles playing the Ed Sullivan show. This is meant to be about the early years with Pete Best, yet even as the man himself is talking about playing in Hamburg and coming back to Liverpool, he's saying it as footage of The Ed Sullivan with Ringo is playing. He talks about business contracts and going back to Hamburg, the interview with him taking up half the screen and there's photos overlaying the other half of the screen of Ringo from the late 60s, They talked about the dekker performance, none of that got played. Worst I think is the details the subtitles got wrong, and the mistakes with the people interviewed going uncorrected. Tony Barrow's name is written as Tony Brarrow every time he's interveiwed, he talks about Eddie Cochrane dying and then says about having to do the concert without the other fellow on the bill who was still performing, nstead of Eddie Cochrane, and there are mix ups over Ringo and Andy White's performances in regards to who performed on the singles and who performed on the album footage. I know it's natural to verbally get these things mixed up, but it's then up to the documentary maker to correct any mistakes in production with subtitled inlays.

So it was an enjoyable watch, it was good to hear Pete Best's side of things for someone like me who'd never heard his side of things before, and a good recap of the manager history, plus how things kept going wrong for them. But it was sloppily made, and you have to be aware of that when watching. There are better short docs about The Beatles than this.