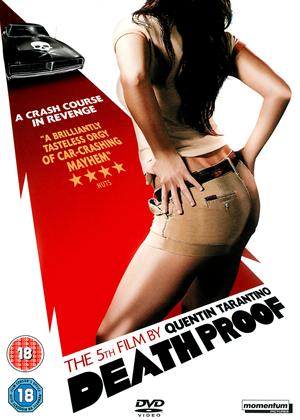 I have to say I’m a big Tarantino fan, and even though the ‘Kill Bill’ films were not up to par, they did somewhat capture the essence of the Asian revenge genre and were pretty enjoyable. I was really looking forward to ‘Death Proof’, and even though it bombed in the U.S, I still had high hopes for Tarantino’s tribute to the Grindhouse genre of horror, but I have to say this is an absolute stinker of a film and easily the worst I’ve seen in a long time. The basic plot of the film is about a serial killer named Stuntman Mike, who builds a death proof car in which he can initiate fatal car crashes and escape with only minor injuries. The trouble is that the killer within the story hardly features at all, and instead the film focuses the two groups of women who will become his victims, this could have been good except there is no real pay off. Kurt Russell as Stuntman Mike could have been a great character though he’s criminally under used, you never learn anything about his character, and in reality has only three brief scenes in the whole film. The dialogue, which is usually superb in a Tarantino film, is just plain awful, uninspired, unengaging and nothing more than meaningless waffle. In reality the entire format of the film is 30 minutes of dull pointless dialogue, 3 minutes of action which include two 3 second gore scenes, 45 minutes of even more dull pointless dialogue, a 5 minute car chase and a really feeble ending. The truth is that ‘Death Proof’ is so awful even the most dedicated of Tarantino fans will find it an enormous let down. If you want to see a decent modern film which pays tribute to the 70’s Grindhouse genre then rent the superb ‘House of 1000 Corpses’, the 2003 remake of ‘The Texas Chainsaw Massacre’, or ‘Wrong Turn’.

'Death Proof', directed by the renowned Quentin Tarantino, is supposedly a homage to the 'grindhouse' films of the 1970s - 1980s, perhaps what in the UK we might call 'video nasties'. It first appeared as part of the 'Grindhouse' double bill of 'Death Proof' together with Robert Rodriguez' 'Planet Terror'.

The film tells the tale of a serial killer, Stuntman Mike (Kurt Russell), who targets groups of young women and kills them with his supposedly 'death proof' car, with stripped out interior, roll bar etc as used in movie stunts. The film is in two halves: in the first, the women are killed; in the second, Mike gets his come-uppance.

While the film may be a homage to the B movie, complete with streaks, bad continuity, abrupt change of shot, transition from colour to black and white and back again, weak story and poor dialogue, regrettably these directorial tricks outweigh whatever point Mr Tarantino may have wanted to make. In particular, the deliberately weak story and poor dialogue make for a very bad film indeed.

The worst aspect is that it is so *boring*. The boring women f-and-blind, talk about boring subjects, and hang out in a bar. The car action with Mike is a very short segment. The second half of the film is similar, with a different group of women who also f-and-blind and talk about boring subjects. While the car action is slightly longer, it's still boring stuff and the addition of the NZ stuntwoman Zoë Bell frankly doesn't add very much.

Nope, didn't like it. See it only if you're a Tarantino completist or you have a burning desire to be bored. 2/5 stars - but only because I have seen even worse.

Thank you for explaining the dreadful cuts between scenes RP. I thought DVD was jumping like a damaged vinyl record. Enjoyed the film. Not very often women play strong characters instead of victims and doormats. Good to see a bully get their comeuppance. Suspect the people commenting on f and blinding and boring conversations are male. I have seen many films with men swearing a lot more and being far more boring, Not as good as Pulp Fiction or Jackie Brown but a enjoyable action movie. Thought the ships mascot car chase was great. Good to see something original.