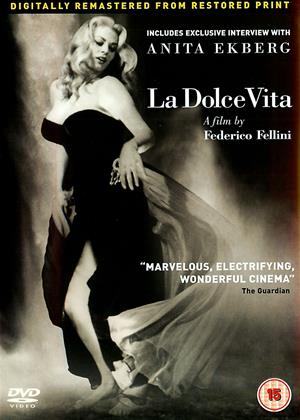 7 days in the life - La Dolce Vita review by Oli

Everyone tells Marcelo constantly 'I feel sorry for you Marcelo' But why do they feel sorry for Marcelo? If anything they are just as equally pathetic as Marcelo and they are a similar type of character who would probably embarrass themselves just as easily. Am I not making sense? Maybe not. But I think this is the real beauty of this picture, anyone could watch it and see a different film, everyone can relate to Marcelo because we've been there most of us, the inevitable crossroads, the frustrating partner who is overly paranoid and won't let go. Then we have the Swedish beauty queen actress, who is a dazzle to watch, even she isn't perfect she has a partner who equally is paranoid and won't let go.

To not also praise this film of it's cinematography would be a sin, as there are some beautifully shot scenes, like Sylvia stepping into the fountain, like Marcelo pulling feathers from a pillow, journalists circling round a normal woman like vultures, she tells them she is not an actress so queries why they are acting like she is, nobody will tell her straight what has happened, all we know is something has happened and the press want a story and the front page photograph to go with it. All in all to summarise this film I will say it is a fantastic observation into human nature and it deserves all the credit it gets.

Did I miss something? - La Dolce Vita review by CP Customer

This is meant to be one of Fellini's best movies ever, yet I didn't really get it. It seemed far too long and by the end of it I felt as if I had missed something. Can anyone enlighten me?

Visually interesting, I noticed the feel of this film echoed in for example, Suburra tv programme but this is about the only positive I can get from this film. It’s dated, boring, and narratively convoluted, with no redeemable characters. I’m giving up with Fellini films, managed to get through La Strada that was a struggle but at least it had a story. Woody Allen referenced italian blokes with sunglasses and smoking coolly, lots of them in this film, but would rather watch Allen’s films than this snore fest.

Beautifully made, well acted and fascinating.

Dull, devoid of sympathetic characters and very long, at least it felt it.

If you watch it you will be able to say you have done so and will not forget having done so. Get it out of the way then get on with watching fun films for a bit.