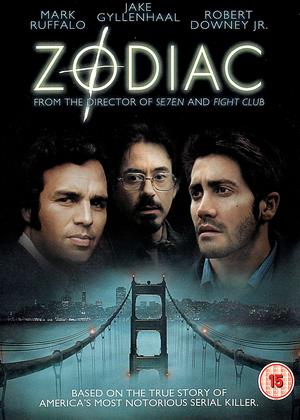 Not what one might have expected from Fincher... - Zodiac review by CP Customer

Firstly, this film is not what we have come to expect from Fincher as a director. It's quite a departure for him from previous movies such as Se7en and Fight Club.

Personally, I loved the movie. Yes, it's long. But let's face it, this is not a film that can be wrapped up in an hour and a half. There's an awful lot of detail involved in this case. David Fincher was very thorough in his research and all credit him for that as it really comes across on screen. This is an excellent, compelling film for anyone interested in true crime and general detective work.

I saw this film a few days ago and was completely absorbed by it. The opening 4th of July sequence is worthy of the ticket price alone. And I challenge anyone to listen to "Hurdy Gurdy Man" by Donovan without a cold chill running down their spine after watching this...

The main performances are excellent; Robert Downey Jr and Jake Gyllenhaal in particular stand out. Any feminists out there won't be happy with the rather one-dimensional women's roles, but this is male dominated movie and it involves a handful of men's obsessive involvement with one case. And these men ARE utterly obsessed. And after so much taunting by the Zodiac with his letters and cyphers, who can blame them for their obsession?

As for the depiction of the murders, they are quite shocking in their brief brutality with absolutely no glamorous or excessive lingering shots of the aftermath. This makes them infinitely more real and much more disturbing...

Combine this with utterly believable dialogue, a superb soundtrack and marvellous production design and you have one classy movie. For all those tired of your average eye and brain-candy Hollywood fodder...I urge you to see this movie!

It was a different film than I expected, the trailer appears as though it is going to be a fast paced race against time job, but it wasn't! However, that did not make it bad. The first half was slow going, but the second much better. Without giving too much away, I was left thinking that it didn't truly explore why Jakes character was so interested, he just floated about for an hour or so and then was the main character??!! You will see what I mean when you watch it!

Overall I enjoyed it, it was long, and probably didn't really need to be, there was lots that could have been cut out! But again, saying that it was a good film, and I would recommend it!

In my opinion this is Fincher's best film to date, and that's saying something. A fantastic tale, unfortunately based on the infamous American serial killer, who till this day remains a mystery. Although new suspects and theories seem to emerge all the time. Here (for a change) we follow the press and police as they try to piece together the merry dance that the Zodiac is leading them on. The level of detail and authenticity here is tremendous. Fincher has also assembled a wonderful cast, with Jake proving an excellent choice. For Blu Ray fans, the transfer here is one of the best I have seen, plus the film includes a huge range of extras. These range from detailed commentaries to extensive interviews with those involved in the real life events. They discuss the mistakes made and their own theories. This is the complete Zodiac package.

Guarenteed to get you thinking - Zodiac review by CP Customer

It's always that much better when the film is based on a real story but the problem with this one is that you don't know whether or not they actually got the right man. You will be checking the locks before going to bed after this one.

Good film, but far too long, you will need a spare half a day.

now hands up who remembers the dirty harry story, the original that is,

this is the film of the real killer that was based on, as police storys go its more than probley a tru dipiction of the long dogged stress that is needed to track trace and fit together the pieces.

well told and acted, a little long but satisfys

I had previous knowledge of the Zodiac serial killer having seen a couple of documentaries about it and put off seeing this film for ages as I knew how the story would both unfold and end. Saying that, I was really surprised at just how well 'Zodiac' works as a thriller and a character based drama, and even though I had prior knowledge of the characters and knew the story I was completely drawn in by the film. The direction from Fincher is expertly paced and the quality of acting is top notch. Even if like me you already know about the Zodiac killings this is still well worth a rental.