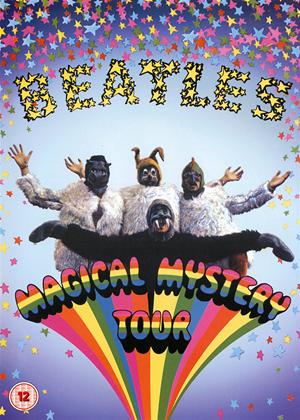 Rent other films like The Beatles: Magical Mystery Tour

This film looks like a home movie made by very rich, very stoned people, because that's basically what it is. Right at the beginning, it briefly seems as if there might be a plot. Ringo Starr, playing an ordinary bloke named Richard Starkey (his real name), and his morbidly overweigh ill-tempered aunt Jessie have bought tickets for the Magical Mystery Tour, a coach trip (and I use the word "trip" advisedly) during which amazing things will supposedly happen. And indeed they do. Aunt Jessie finds true love for about 5 minutes before that subplot is forgotten, which is a pity, since it's the only thing remotely resembling a plot in the entire film.

As for the rest of it, the people on the coach - the Beatles, various friends of theirs, and a dwarf because if you're making a self-consciously weird movie there has to be a dwarf - drive around Britain doing random wacky things. The late, great Ivor Cutler as Aunt Jessie's unlikely love-interest almost convinces you that this is the kind of film in which the actors can be bothered to act, but he's badly underused, and he doesn't get to perform any of the songs, poems or monologues for which he was best known. Which is most unfair, since the Bonzo Dog Doo-Dah Band are allowed to contribute the strangely inappropriate song "Death Cab For Cutie", which has nothing to do with anything.

The Beatles of course perform a number of songs, all very much from their B-list except "I Am The Walrus", several of them accompanied by visuals which would no doubt be very impressive if you were watching them on a big screen under the influence of LSD, but are otherwise somewhat underwhelming. They also improvise a couple of terrible sketches in which they dress up as wizards and pointlessly muck about. Technical standards are equally random - whether the shot's even properly in focus seems to depend on who happened to be holding the camera at the time (by the way, Ringo is credited as the director of photography).

And then, after only 53 minutes, it just stops, although nothing has been resolved and the tour doesn't even appear to have ended. I guess they ran out of film. Or maybe it was supposed to be twice as long but some of the "cameramen" didn't know you had to take the lens-cap off. Of minor interest to Beatles completists, and anyone who wants to know what kind of film a heterosexual non-Satanist Kenneth Anger might have made when he was 12.