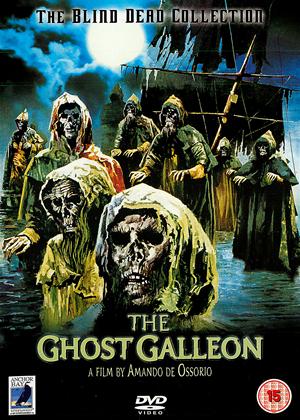 Reviews (1) of The Ghost Galleon

The trailer for this film severely undersells it. In it, a bevy of shrieking young ladies are endlessly faced with stumbling hordes of skeletal, cowled zombies. The truth is, there is far more to the film than that.

Having said that, there are a collective of briskly-dressed girls paraded before us, rarely more so than in the opening shot of three models enduring a photo-shoot orchestrated by a woman in the most extraordinary trousers. She conducts the session whilst smoking, reminding/informing us that little takes place in the 1970s without the accompaniment of a cigarette.

Noemi (Bárbara Rey) is concerned about her missing friend, who is on an engaged in a secret publicity stunt on a boat in the middle of the ocean. Having been made aware of this, Noemi is kept prisoner in a bunker until the stunt is over, and she proves to be one of the most wonderfully uncooperative hostages ever. President of the company responsible for all this is Howard Tucker, played by Jack Taylor, who would feature the following year in Franco’s ‘Female Vampire’. And yet the story mainly concerns that friend, Lillian (Maria Perschy) who, whilst looking for her departed companion Lorena (Margarita Merino) discovers a deserted galleon in the midst of the ocean fog. The galleon is represented by the most charming model, draped in dry ice. It is easy to notice the ‘limitations’ of special effects from a film from this time, and yet despite that, there is a genuine feeling of unease as the creaking old vessel is explored in a seemingly alternative world of perpetual darkness.

Thanks to the trailers, the creatures – the Blind Dead, or Knights Templar – are hardly a surprise, and yet remain hugely effective and creepy, with their withered claws, rotting cowls and dead-eyed skulls. Resting in dusty caskets, their appearance is often enhanced by ghostly chanting on the soundtrack. Filthy, decaying cadavers, they remain unglamorous frighteners to this day – and there are loads of them! There is no escalating tension to their scenes, indeed apart from the monk-like accompaniment, there is no thumping score to accentuate their menace – instead, their relentlessly sluggish deliberation is conducted in silence, creating a very ethereal style of torture and death – if there is such a thing!

This is the third (and strangely, the least successful) of four Blind Dead films that form a loose series. Inspired in part by the success of 1968’s ‘Night of the Living Dead’, these films were part of the Spanish horror boom of the early 1970s.